The Ghosts of Cannae_Book Review 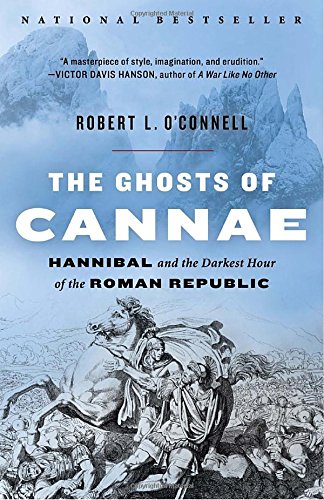 Imagine if you will being one of the few survivors of perhaps the worst military disaster  of all time-a disaster that saw 90% of  your comrades killed!

Then imagine your government blaming you and the other survivors for the disaster while your leader\general who got you into the disaster in the first place suffered no consequence and was in fact rewarded with another command while you and your fellow survivors were exiled.

Your exile would be to a far away place and you would be cut off from family and friends. Although you still are a soldier you would not be paid and yet be expected to do whatever duty you and the other survivors are ordered to do.  To your government and to your family and friends you are a living ghost-someone who should have died in the disaster but did not.

This was the fate of the 10,000 survivors of the Battle of Cannae and the worst military disaster Rome would ever suffer. Your exile and the exile of fellow survivors would have dire consequences for the Roman Republic although that would be in the future. (You’ll have to read the book to see what O’Connell says about those consequences.)

O’Connell has written a brilliant book that comes in at a little over 300 pages. It includes notes, references and a helpful glossary to help the reader wade through the names of the major personalities involved in the 2nd Punic War.

Chief among those personalities is the general who inflicted the catastrophe at Cannae- Hannibal Barca. Carthage’s military genius and truly one of the greatest military geniuses of all time.

Hamilcar Barca, Hannibal’s father and one of the few successful Carthaginian commanders in the first war developed an insatiable hatred for Rome. It is thought (with reasonable conjecture) that Hamilcar passed on this hatred to his three sons; Hannibal, Hasdrubal and Mago. It was Hamilcar who carved out an empire in Iberia (modern-day Spain) after the loss of Sardinia and Sicily to the Romans. It was from the Carthaginian holdings in Spain that Hannibal would launch his invasion of Italy through an epic journey through the Alps.

After these defeats Q. Fabius Maximus (wisely) devised a strategy of avoiding battle with Hannibal and relied on attrition instead. Although the strategy would become THE strategy after Cannae it was unpopular when first devised.

In addition to being the type of people who never gave up the Romans were aggressive to point of recklessness. The aggressive party lost patience with the Fabian refusal to face Hannibal in the open and instead raised a massive army of 80,000 infantry (Romans and Italian allies) and 6,000 cavalry.

It was thought with some good reason that this massive army would smash Hannibal’s outnumbered Carthaginian polyglot army that included Iberians (from Spain) Gauls and a core of African spearmen and end the invasion once and for all. The aggressive party failed to factor in Hannibal himself who was not apparently intimidated in the least.

Instead Hannibal took a huge risk with an unorthodox battle formation. Instead of the usual placement of the best troops in the center of a battle line he placed his veteran Africans in columns on both flanks supported on both flanks by the one advantage the Carthaginians had over the Romans; their cavalry, light horse in the form of Numidian’s and heavy horse supplied by the Iberians and Gauls. In the Carthaginian center he placed his Gauls the most expendable of his troops and the more easily replaceable. To stiffen the Gauls who could become fickle after their first fierce charge he placed his trusted Iberians to provide that stiffening. 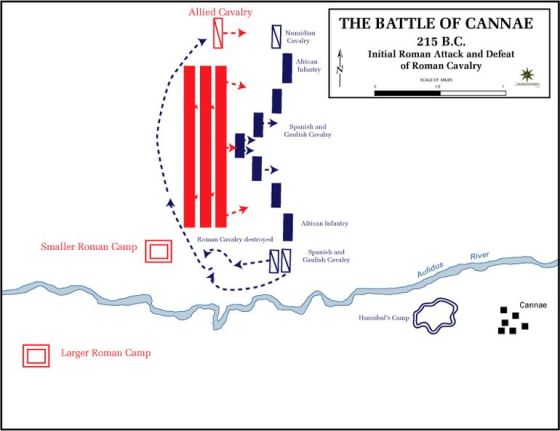 The idea was for the Gauls and Iberians to engage first and then slowly give ground. As the Romans advanced in the center and the Carthaginian cavalry gained the flanks the Romans would be subjected to getting surrounded once the Romans pushed into the center far enough to allow the African spearmen to box them in on both flanks.

The plan was risky because it relied upon the Gauls and Iberians in the center to give ground slowly in the face of the Roman juggernaut. Retro movements in an ancient battle often meant a recipe for a rout. 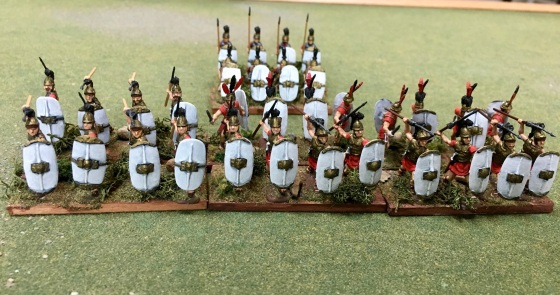 Miniatures from my war game collection-a Roman Legion from the period of Cannae.

But the Iberians and Gauls held just long enough for the Carthaginian cavalry to rout the Roman\Allied cavalry on both flanks and then return to attack the Roman infantry in the rear. At the same time the columns of African spearmen wheeled into phalanxes and boxed the Romans in on both sides while the resurgent Gauls and Iberians contained the Romans from the front.

Gauls or Celts. Thousands of Gauls joined Hannibal to fight their hated enemy the Romans. This base is from my miniature collection.

The Romans were actually too numerous to maneuver or even fight. Once they realized their predicament many tried to surrender or simply allowed themselves to be killed where they stood. It was a bloodbath that frankly exhausted the victors as they butchered the trapped legions. 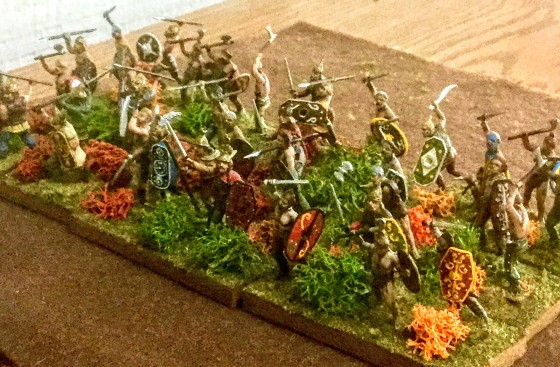 The Romans lost upwards of 50,000 men. Approximately 10,000 survived because they held the Roman camp. A few thousand others must have managed to cut their way out as did some of the cavalry who escorted the Roman General Varro off the field.

It is likely that any other ancient state would have sued for peace after such a disaster, but not Rome.  If there had been a chance Rome would give in it would have occurred right after the battle had Hannibal threatened Rome itself while the Romans were still in shock.

Instead, Hannibal moved in a different direction hoping to shatter the alliance Rome had with their Italian allies. It was the kind of fortunate break the Roman Senate needed to recover and raise even more armies. One of the remarkable things about the 2nd Punic War is the seemingly inexhaustible reserve of manpower that Rome and her allies could draw upon. Although desperate at times by enlisting slaves it didn’t take the Romans long to field multiple legions (over two dozen at times each numbering around 4000 men) and dispatching them to multiple fronts in Italy, Cisalpine Gaul, Illyria, Iberia (Spain) and Sicily.

Prior to Cannae the Roman government took the unusual step of forcing an oath on the Roman Army that would fight at Cannae. The oath made them swear they would die fighting rather than retreat or surrender.

The 10,000 left to hold the bag in the Roman camp as well as the few thousand who managed to escape were thought to have broken that oath and thus were worthy of disgrace and exiled to Sicily The Roman General Varro did not share their fate (being a fellow aristocrat had much to do with it).

The survivors  became the “ghosts of Cannae” and for them (and the Romans that survived the two Battles of Herdonea who were also exiled) their redemption would wait many years until a general named Scipio (who also survived Cannae as a young man) put them to good use understanding that they were not cowards and the defeat at Cannae was not they’re doing.

Meanwhile, the Fabian strategy of avoiding Hannibal in battle was put into good effect with a few exceptions. Hannibal and his army became contained to a small area on the Italian boot and eventually recalled to Africa to defend Carthage itself from the same Scipio who used the ghosts to good effect by invading Africa. Scipio was finally the Roman general who was the equal of Hannibal and it was Scipio who gained the name Africanus after defeating Hannibal at the Battle of Zama with the ghosts of Cannae.

O’Connell is no dry historian and boring to read. Instead he weaves a story line that uses Polybius and Livy (the two main resources for the 2nd Punic War) to great effect. The book almost reads as a novel as O’Connell tells the story not only of the ghosts but Hannibal and Scipio as well.

I was familiar with the Battle of Cannae and the background of the 2nd Punic War but O’Connell’s book gave me fresh insight and easily became one of those books hard to put down even though you knew how it ended-it was getting there that was all the fun.

Hannibal. Despite his military genius Hannibal fought a war he could not win against the ancient world’s first super power. 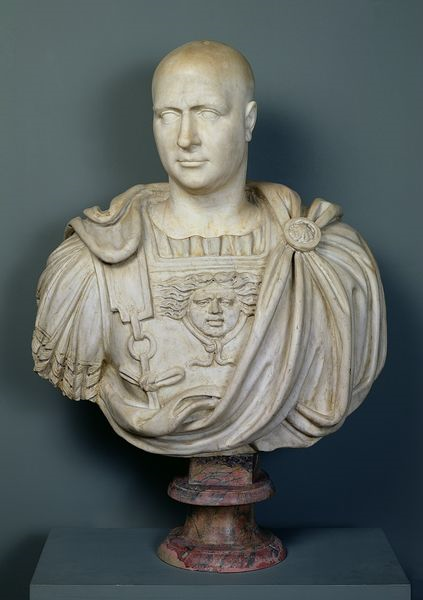 Scipio Africanus the Roman general who would finally defeat Hannibal at the Battle of Zama, 202 BC.