The beginning of Saving Private Ryan was, at least for me, twenty minutes of the most intense movie watching ever. It’s so intense and so realistic you feel compelled to turn away but cannot. The movie illustrated in full living color the hazards of an amphibious landing during the Second World War in all its horror.

The movie did what written memoirs often fail to do because the written word does not convey the horror like a picture can.

Yet, I recently read a brief account of one Major Shaw of the 29th British Infantry Division. Major Shaw recorded what the beach landing at Gallipoli on April 25, 1915:

About 100 yards from the beach the enemy opened fire, and bullets came thick around, slashing up the water. I didn’t see anyone actually hit in the boats, though several were; e.g. my Quatermaster-Sergeant and Sergeant-Major sitting next to me; but we were so jammed together that you couldn’t have moved, so that they must have been sitting there, dead. As soon as I felt the boat touch, I dashed over the side into three feet of water and rushed for the barbed wire entanglements on the beach; it must have been three feet high or so, because I got over it amidst a perfect storm of lead and made for cover, sand dunes on either side, and got good cover. I then found Maunsell and only two men followed me. On the right of me on the cliff was a line of Turks in a trench taking pot shots as us, ditto on the left. I looked back. There was one soldier between me and the wire, and a whole line in a row on the edge of the sands. The sea behind them was absolutely crimson, and you could hear the groans through the rattle of musketry. A few were firing. I signaled to them to advance. I shouted to the soldier behind me to signal, but he shouted back, “I am shot through the chest”. I then perceived they were all hit. A Brief History of the First World War-Eyewitness Accounts of the War to End All Wars, 1914-18

The Gallipoli Landings was the result of a good idea that was badly managed.  The idea was to launch an amphibious landing with British, Australian, New Zealand, Indian and French troops on the Dardanelles in the hopes of taking Turkey out of the war and aiding Czarist Russia. 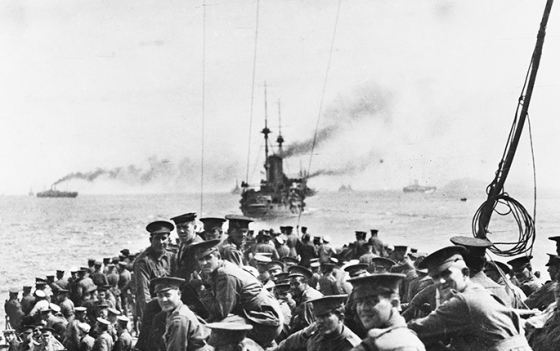 Men of the 11th battalion and 1st Field Company, Australian Engineers, assembled on the forecastle of HMS London at sea off Lemnos, 24 April 1915. The next morning they would leave the London to land on North Beach, Gallipoli. Australian War Memorial A02468. http://www.nma.gov.au/online_features/defining_moments/featured/gallipoli_landing

Everything went wrong and thousands of Allied soldiers lost their lives in a fruitless attempt to even get off the beach. Major Shaw’s account was only the beginning of the horror.

Eventually, defeat was admitted and the remaining forces were withdrawn. The clip below illustrates how the well-intentioned flanking movement turned into the slaughter of trench warfare.

← Eastern Front in 1/72 Part IV
Gallipoli and the Battle of Lone Pine (Australians at War) Revisited. →