Posted by Bruce on March 11, 2013 in History, News and Commentary, Nostalgia

I confess to being just a little steamed.

I just read where some hair-brained school administrator in Michigan stricken with the horrifying disease of liberal wussification did not allow some little boy to put toy soldiers on the cup cakes he brought to school. Why may you ask? 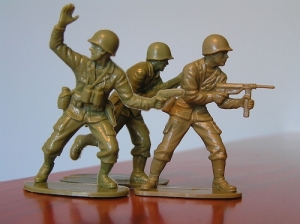 This is what happens when liberals start to run the world.

I guess I must be messed up because back in the day (1960’s) my little friends and I played with toy soldiers and toy guns. We must be screwed up given the amount of time we devoted to the “little wars” we fought with our army men and the time we spent playing “army” with our toy guns (and sticks we pretended were guns).

To us, it was quite normal to play army. You were a boy, that’s what you did.

Yeah, back in the day little boys played with little boy toys like army men and toy guns and little girls played with dolls and tea sets but that all started to change when the liberal wussified establishment declared war on “war toys” and American History in the 70’s.

Toy soldiers fell out of favor as did toy guns and little boys started to grow up getting in touch with their feminine side, meaning the liberal wussified of whatever that was supposed to mean.

And now it’s to the point we can’t have toy soldiers in public schools. Just another reason to be for school choice.