Posted by Bruce on November 4, 2018 in Last Man Club, wargames

Doing an ancient battle that featured an ambush is no easy task if you want the ambushed to have a fighting chance of victory.

Historically, Hannibal pulled off an ambush of a Roman army near the River Trebbia in 218 BC. The Battle of Trebia was a resounding defeat for the Romans with only 10,000 of their 40,000 men surviving to fight another day.

Hannibal managed to coax the Romans into crossing the icy Trebbia to make a frontal assault on his deployed Carthaginian army. At the same time Hannibal managed to get his brother Mago concealed behind the Roman juggernaut and attack them from the rear just at the right moment.

The Roman’s fell into a carefully planned trap.

To try and reproduce the battle with my version of DBA I used the map below from Command and Colors Ancients (CCA).

I convert the board game counters into the corresponding elements in DBA and come up with an Order of Battle. I match the deployment on the elements to the map and set out victory conditions that give, in this case, the ambushed Romans a fighting chance.

The Order of Battle is given below the map I copied from the CCA website (lots of free scenarios for ancients there).

I took pictures of the game but they are not in order and since the game was a month ago I’ve lost the blow by blow which ended up in a Roman defeat. They did have a chance.

I will try to caption the pictures for the interested reader. 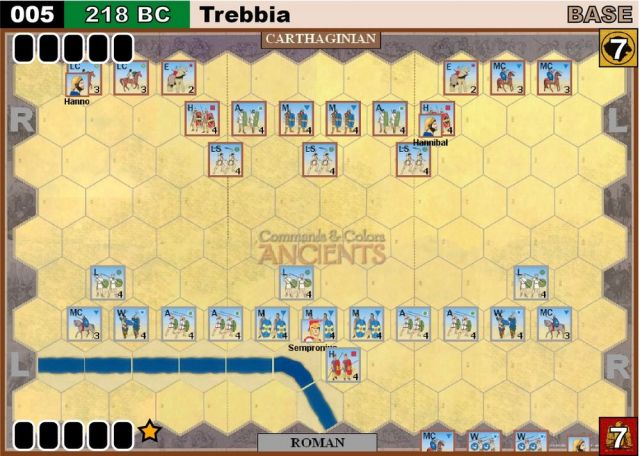 The game was a great time. It won’t be easy to take on Hannibal the Great. More to come in my Second Punic War series.