History Stuff that interests me enough to write about
13 Comments

Who was Private Charles E. Teed?

I’m back with another “history stuff” blog entry that I got from Life Magazine. The issues I possess are a treasure trove of Americana (late 1930’s) through the war years when Life was fully dedicated to the war effort.

I have the issue and I read the article. My first thought after reading the article was whether or not Private Charles E. Teed survived the war.

Turns out he did. This is what I found out via the INET.

The Effingham County Courthouse Museum published this piece on FaceBook in 2015.

Charles E. Teed was born May 24, 1919 the only child of Ralph and Violet (Cramer) Teed. He attended the local schools. Charles later opened a small cafe in Effingham.

He was drafted into the Army in 1942. Shortly before he shipped overseas he won $200 shooting craps and was able to send for his fiancee Violet Kincaid and marry her before he headed to the European Theater.

Charles Teed was selected by Life magazine to be featured as the Private representing the best the Army had to offer. His journey led him from Effingham to Fort Bragg, North Carolina, Casablanca, Sicily, Utah Beach, St. Lo, and finally back to Effingham after 5 years.

He was wounded twice. The first time was shrapnel in his leg, but the second time he was wounded happened outside of St. Lo when a bullet shattered his arm and lung. Sgt. Teed drug himself over to an orchard. As he looked up at the sky and clouds he thought that would be the last thing he saw. Luckily he was finally found by his platoon guide and shipped to a hospital.

Sgt. Charles E. Teed received 2 Purple Hearts, and 5 Battle Stars and rose to the rank of Sergeant. Life magazine featured him in 3 different issues including one 25 years later where Life magazine took Charles and Vi on a journey retracing his movements through his five years in the Army during WWII.

After he was discharged from the Army, Charles came back to Effingham where he and Vi raised their family. He eventually opened a TV repair shop at his home on Kentucky Street. He later worked at Crossroads Press.

When the Life Magazine issue appeared in 1942 the US had been barely at war for 4 months. Everyone knew someone who had been drafted or probably would be drafted soon. (My father turned 18 in May, 1945 and was immediately drafted.)
Friends, relatives and just about anyone else concerned about the war would probably wonder what it looked like to be drafted into the Army (the Navy and Marines drafted in WW2 as well.)  The article that accompanied the pictures was written by St. Claire McKelway. McKelway did not work for Life Magazine. Prior to the war he worked for the New Yorker Magazine and during the war served in public relations for the Army. Clearly his assignment was to give the American people a glimpse into Army life and boost morale.
Teed was 22 when the call came.  He was the only child of Ralph and Violet Teed. He was born in Effingham, IL which was a small farming town and still is. Charles’ father worked on the railroad but was killed by a train in 1939. Teed’s dad had been a hard worker and the Teed’s had the benefit of a nice house when the elder Teed was killed in the accident.
The railroad settled for a $5, 500 payout to Violet and that plus $3,000 in life insurance enabled Violet to purchase a restaurant in town. Charles became the kitchen manager and through his position he met his future wife, another gal named Violet (Cramer).
When Teed was drafted he simply went. His country needed him and that was all there was to it. Teed was typical of the millions of young men who literally dropped everything and went to their induction and training centers.
The bulk of the article deals with Teed’s basic training as an infantry soldier. No matter what else you might become in the US Army you were first an infantry rifleman.
Another thing typical about Teed is the marrying his sweetheart before he shipped out overseas. Marriages increased dramatically during the war years and I suppose some of that was driven by the possibility the soldier might not make it home. Whatever the reason it certainly gave the soldier a good reason to come home as well as that strong emotional connection to home while he was away. (Soldiers treasured letters from home and read them over and over.)
According to the article Teed wondered if he would get into an actual battle. It was something to think about because for every frontline soldier there was another eight keeping him supplied. Teed also thought he’d only be in for a year. This surprised me when I read it because I had thought men were drafted for the duration of the war but perhaps Teed thought the war would be over in another year once the US got over there-where ever over there was!
As it turns out Teed did see action, first in North Africa, then Sicily and then Normandy and beyond. He was wounded twice and made Sergeant by the time he got out of the army.
Here’s some of the pictures Life used to tell Teed’s story.

Teed is the second soldier in the foreground with his helmet at the “jaunty” angle. The caption says that Teed is the backbone of our fighting forces. Teed was trained as infantry. Infantry units took the highest proportion of casualties and by late 1944 most US battalions had shortages of trained riflemen. The infantry were the backbone. The helmets are of the WW1 pattern. They resemble the British model but are not quite the same. American and British helmets of the design look like upside down soup bowls. The American version would be replaced entirely by 1943 with a new model that lasted until the late 1980’s. (Some of the soldiers in the column are wearing “overseas” caps. I wonder if there was a helmet shortage. 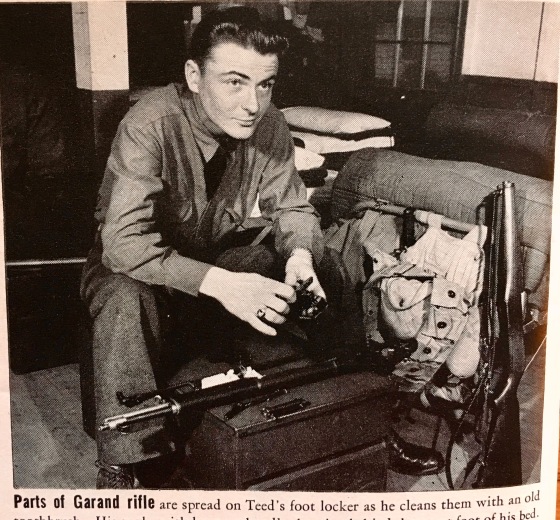 It was interesting to me that Teed is cleaning a M1 Garand-a superb weapon that featured a eight round clip, a major improvement over the bolt action Springfields that many American soldiers were still using in March, 1942.

The caption reads Teed on KP (kitchen police) duty (left). Perhaps Teed is eating some of the food he had a hand in preparing (right). The American Army in WW2 was the best equipped and best supplied of all the belligerents.

Teed’s soon to be wife Violet Kincaid looks down the barrel of an obsolete 75mm artillery piece that dates back to WW1. The gun is of French design. I’m not sure the American Army used these old pieces in WW2 but many other nations did. (The army did have a 75mm artillery piece but it was an improvement over the WW1 model and did look like the piece in the picture.) 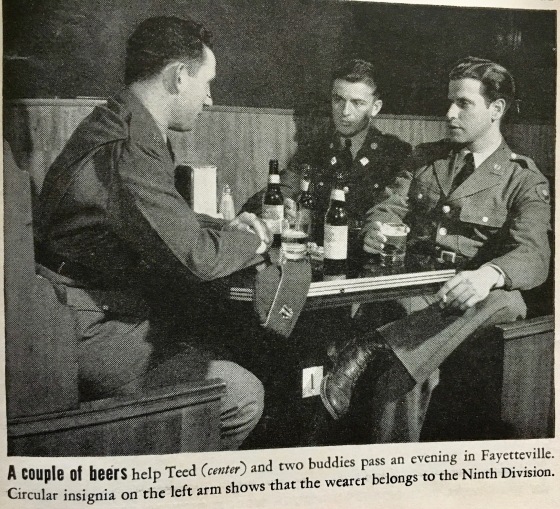 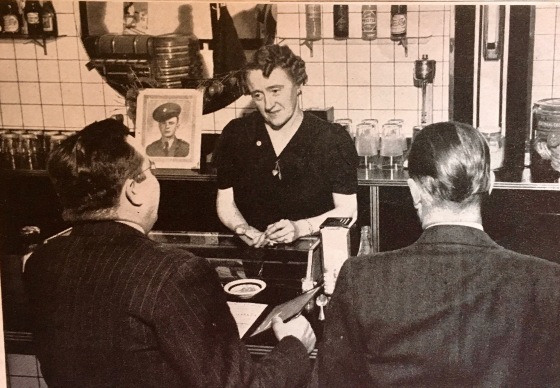 Teed’s mom with her son’s picture to her right at the restaurant they started with the money they received after Teed’s father was killed in an accident. Notice the slight smile on Mrs. Teed’s face. Like most moms of the period she would be proud of her son but also worried. I suspect she may have been uncomfortable posing. A mother who lost her son in battle was called a Gold Star Mother. A little flag with a gold star was put up in a front window of an apartment or house to give notice that a mom was grieving and  that her son had been killed. Over 400,00 gold stars were awarded in WW2 to American moms. Teed made it home as noted above.

I confess that I had second thoughts researching the story on Pvt. Teed. I felt like I was intruding on a family’s personal story. Others may have felt the same way as I saw some people offering this same Life issue to a researcher who was researching the story.  I’m glad the family had access to the issue and I’d gladly donate my copy to the family if they requested it.
Having said all that I intend this blog entry as a tribute. I think Teed was typical in many ways. The generation he came from was called the greatest and it’s easy to understand why. It was the last time the US fully mobilized for war and it was on the heels of the Great Depression. Most responded to the crisis out of a sense of duty and love of country. Many families gave the “last full measure”  with the lives of their sons. I hope this blog serves in some small way to pay them all tribute.

13 comments on “Who was Private Charles E. Teed?”