I’ve continued to adapt scenarios from the Command and Colors Ancients website to my version of DBA that I call DBA 1.0_BR (in 1\72nd scale). The original scenario was authored by a chap named Joe Bisio so I want to give credit where credit is do. I hope Mr. Bisio will forgive the liberties I took with his fine work.

For of those you unfamiliar with the Command and Colors Ancients maps\scenarios here is Mr. Bisio’s rendering of the map and troop types as per CCA. 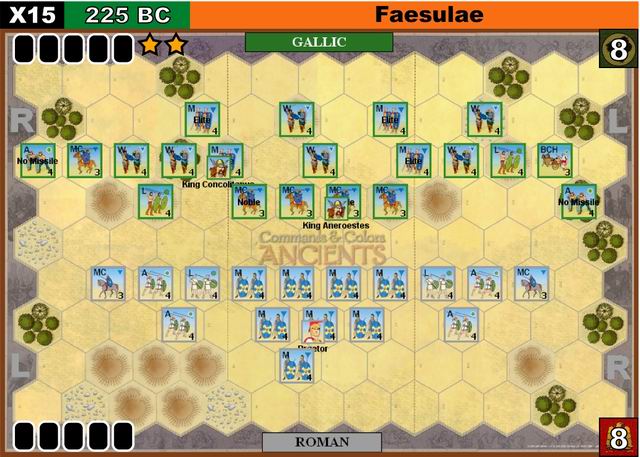 One of my goals is to be able to replay the scenarios. I try to have a few variables such as a rule that provides for a level of degree as to how effective the surprise was. Dicing for the effect of the death of the Gaul king was another.

Another goal is try and have enough time to play the scenario twice and switch sides. Doing that has a number of advantages when it comes to determining how re-playable the scenario is. If you get the same old outcome every time you play it can become a bit predictable and boring. Fog of War stuff can change that as can a commander who has a different plan.

And so it was in our second game (two games in 3 hours!).

The Gauls lost in sudden death in the first game (Fog of War rule) but in the second game won by a ration of 8-1. The Roman commander attributed the loss to Fog of War (bad dicing). He has been transferred to MooseButt, Germania for the loss 😉

Whatever the case I’m trying to do a scenario that has more to do with a simulation than a competitive match. At present I’m trying to figure out how to do Telemon and that will complete a three game series.