This past summer I found what I consider an amazing find-a World War One copy of The Illustrated London News. It’s marked on the inside, Sante Fe Reading Room and somehow it made it to an obscure antique store in SW Wisconsin. 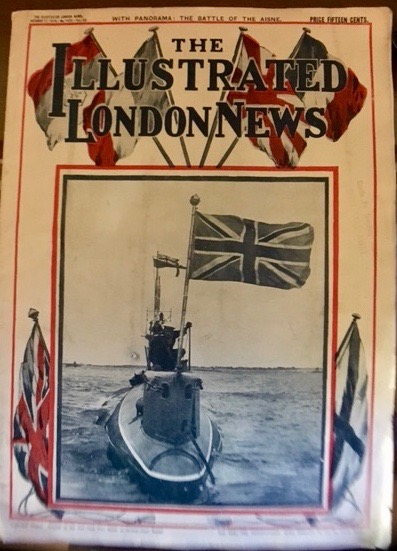 As described in the above paragraph the magazine can still be viewed in digital form and given that it dates back to 1842 that’s something any history buff could enjoy. Nevertheless, I obtained a hard copy in fair shape that dates back to the early days of World War One.

The magazine seems to be a cross between a magazine and a newspaper. It features numerous pictures and art work as well as good articles to support the pictures and illustrations. You certainly get a feel for the period reading through it! (The ads are fascinating and give an excellent idea of what products were popular 100 years ago.)

Virtually the entire issue is dedicated to World War One. Bt the time this issue was published Great Britain had been involved for about three months declaring war on Germany following the German violation of the Belgian border as they advanced on France.

The first article is a lengthy article divided into smaller articles titled The Great War. On the first page it mentions an aviator by the name of C. H. Collett, an officer of the Royal Marine Artillery. (Aviators were recruited from all others branches of service since no country had yet organized an Air Force as we know them today.) Finding out more about C. H. Collet became a bit of an obsession.

I ran a Google search for Flight-Lieutenant Collett. Th search turned up his picture in two places on the Web and one of them is on eBid as a reprint from a 1917 Imperial Tobacco Card and the other is on Wiki.

So, how did Flight-Lieutenant Collett get his picture on a 1917 Imperial Tobacco Card?

Collett was a bit of a celebrity before the war because he made a non-stop flight between Plymouth and Grimsby, both in the UK. Grimsby is about 350 miles from Plymouth and today its takes about 5 1\2 hours by car to make the trip. I can only wonder how long it took in an early biplane (actually an early monoplane-see below)  since they didn’t go much faster than today’s cars. I’m guessing it took about the same amount of time. Ironically, Collett performed the feat in a German airplane.

Collett gained further fame during the early days of World War One because he bombed a German Zeppelin hanger in Dusseldorf, Germany. The History Channel did an article on the raid which took place on September 21st, 1914. The article can viewed here. Collett received the Distinguished Service Order for his part in the raid.

Collett was regarded as one of the best naval airmen in those days of early aviation.

Collett’s unit was part of the terrible Gallipoli Campaign where his unit flew bombing missions and performed reconnaissance duties. By August 1915 his unit was back in Britain where sadly, Collet was killed in a flying accident. You can see what else we have of Collett’s history and record here.

A couple of pages later in the magazine there is a two page spread titled; Dead On The Field Of Honor Naval and Military Officers Who Have Been Killed on Active Service. The spread has small pictures of each officer along with their name and unit or ship. There is about 50 pictures and although limited to officers it does give a glimpse into the terrible carnage of World War One. I wonder if Collett appears in future issues of the The London Illustrated News?

On the bottom of the page it lists other officers killed and it ends with this line: The death-roll of our Army and Navy grows day-by-day, but, while we deplore the sorrow which casualties bring, the names will live for all time in the chronicle of the world’s greatest war.