History Stuff that interests me enough to write about
7 Comments

The Saga of Liver-Eating Johnson

If ever there was a sub-title to grab your attention then certainly, The Saga of Liver-Eating Johnson is it!

The full title with cover notes is as follows:

Recently, my wife and I traveled out west. Part of our journey included Cody, Wyoming and Yellowstone National Park. It was in Cody at the Old Trail Town attraction that I purchased Crow Killer-The Saga of Liver-Eating Johnson. I read it when my wife drove on our long journey home. We put on 3000 miles over an 11 day period and drove about 1/3 of those miles.

The movie Jeremiah Johnson starring Robert Redford as Johnson is roughly based on the adventures of the real John Johnson or Johnstone. Jeremiah Johnson is a great movie in my opinion so it was fun to read the book and see how much of the movie lined up with the book by Thorp and Bunker. 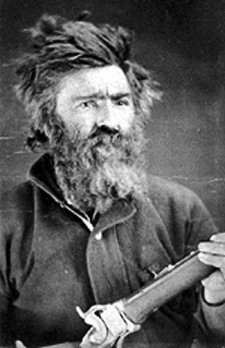 Since the movie only had so much time to tell a story it focused on the real Johnson’s reputation as the “Crow Killer.” In the 1840s the Native American Tribe known as the Crow lived in what is now Montana, Wyoming and even into North\South Dakota where the Sioux and Northern Cheyenne were their traditional enemies. If you think the Native American tribes didn’t fight among themselves guess again.)

In the book, Crow Killer takes a Flathead wife named Swan. Flatheads received the unusual name because traditionally a flat stone was strapped to the back of a baby’s head to make it flat. Swan for one reason or the other escaped that treatment and yet was the daughter of a Flathead chief. Swan was a Flathead without the flat head.

As the story in the book goes Crow Killer Johnson leaves the cabin to do what mountain men did-trap and hunt. While he is away the cabin is attacked and Swan is brutally killed and scalped by young, impetous and unwise Crow warriors. When Crow Killer returns he finds his dead wife eaten by scavengers and reduced to a pile of bones. Swan’s killers had scalped her. Johnson notices a smaller pile of delicate bones and concludes that Swan was well along in her pregnancy when she was murdered. When Johnson had left he did not know Swan was pregnant which says something about the length of time he was away from the cabin.

Crow Killer gathers up the remains of wife and child and places them in a pot which he then places in a crevice in a rock formation. It would become a type of shrine for Crow Killer. Crow Killer then leaves the cabin to inform his Flathead father-in-law who is chief of a band of Flatheads.

As it goes in the book about 50 Crow happen to be traveling to the very Flathead encampment where the Crow Killer’s father-in-law is chief to trade for horses. The father-in-land declares war on the Crow and plots an ambush from which only 13 Crow escape.

Prior to the ambush Crow Killer tracks and kills a huge Crow warrior who just happens to have Swan’s scalp as a trophy. How Johnson knows the scalp is his dead wife’s is a mystery but throughout the book Johnson is noted for being able to “read sign” better than any other mountain man. The incident begins Johnstone’s vendetta against the Crow. The Crow retaliate with a vendetta against Johnson and send 20 warriors one-at-time  to kill Johnson. Johnson kills all twenty over the period of many years and supposedly eats their livers to mock the Crow-hence the nickname Liver-Eating Johnson, the nickname fellow mountain men gave to him.

The movie Jeremiah Johnson has a different take on the personal war with the Crow and while it’s been a while since I’ve seen it I do not recall any reference to the Redford character eating Crow livers after he kills them.

In the movie Redford as Jeremiah does reluctantly take a Flathead wife and grows to love her. A short time later a woman known only as “Crazy Woman” gives Johnson her son-a boy who appears to be 8-10 years old in the film. Jeremiah now has a family going that he never planned for.

Before I get back to the personal war with the Crow something must be said about the crazy woman since there does seem to be some facts associated with her story. In Wyoming for example, there are ample places named for the crazy woman such as Crazy Woman Creek.

Crazy Woman’s last name was Morgan and her husband got into some kind of argument with the wagon train’s leader that they were traveling with. Crazy Woman’s husband decides to separate from the wagon train (bad plan) and camps alone at would become Crazy Woman Creek. While camped the husband goes to the creek for some reason and fails to return (oh-oh). Crazy Woman sends her two young sons to get him (oh-oh) and they fail to return. She then sends their 18-year-old daughter to fetch them all (oh-oh) and she does not return. Crazy Woman then decides to go herself and arms herself with a camp axe. She comes upon a horrifying scene. Her husband has been scalped but is not dead and is bound to a tree apparently being tortured by 12 Arapahoe warriors. Crazy Woman’s two young sons lay near by dead and scalped as does her daughter who had been raped, then killed and scalped as well. Crazy Woman goes crazy with the axe and manages to kill four of the Arapahoes while the rest flee in terror with the not quite dead husband.

In the book Johnson discovers the scene shortly after it occurs and helps Crazy Woman bury her loved ones in three graves along with a fourth grave to hold her husband’s scalp which was left behind by the fleeing Arapahoe. Crazy Woman decapitates the four Arapahoe and places their skulls on the four graves. The area around Crazy Woman Creek becomes a no-go taboo area for all the tribes but especially the Arapahoe because the Native Americans tended to leave crazy people alone for spiritual reasons.

In the book there isn’t a small boy that survives as in the movie.

Now back to the personal war with the Crow as in the movie.

In the movie Redford\Jeremiah Johnson is talked into guiding a wagon train that has to get through the mountains before the dead of winter sets in. He reluctantly guides it through a Crow burial ground to save time knowing full well this will annoy the Crow if they discover their burial ground has been violated. After he gets the train through the burial ground he points the train in the direction they must go and he hastens to return to the cabin only to find his Flathead wife and Crazy Woman’s son dead, killed by the vengeful Crow.

The deaths of his wife and Crazy Woman’s son were recent because Jeremiah is able to track the Crow that did the deed in the snow. He surprises them and kills about 4-5 of them and his reputation as the Crow Killer is established. The Crow as a tribe seek revenge on Jeremiah. Much of the rest of the movie deals with Jeremiah’s adventures as the Crow come at him one-at-a-time. As in the book Jeremiah manages to kill all his would be killers.

And that is a not so brief summation of the differences between the book and the movie.

Here’s the book review if you are still with me:

When I purchased the book I knew vaguely that the Redford movie was associated with the book. What I didn’t know is that the book, rather than be a fact-truth kind of book is really folklore where it is difficult to determine fact from myth\fiction.

The new introduction to the book wades through all of that and in retrospect helped me enjoy the book “as folklore” without trying to hard to determine fact from myth.

The introduction by Bender points out the many issues with the original authors and what were the supposed “facts” when the book was first published in 1958. The book has a sensational aspect to it and was published at a time when we were far less politically correct (nor fair to Native Americans) than we are now. In the book racial prejudice is much in evidence although paradoxcically “Liver-Eater” comes across as  respecting Native Americans but yet uses racial epithets to characterize them. The real or mythic Johnston comes across as the product of his times something we would do well to remember when judging people of the past with contemporary standards.

Oral tradition among the Crow states that it was not the Crow who had the personal war with Johnson. It was after all Johnson’s fellow mountain men who gave Johnson the nickname. It seems that Johnson accepted the nicknames and if the tribe was not the Crow then Johnson had plenty of time to correct the error. He never did.

As to the liver-eating business it appears in the book that Johnson never denied it either but it was only witnessed twice and both times it could have been Johnson “showboating.” One time it was a Sioux liver he took a bite out of to impress the Crow scouts with the US Army during the Great Sioux War of 1876-77. By that time, according to the book, Johnson had made peace with the Crow and they were with him as scouts serving together in the Great Sioux War. (George Custer had Crow scouts with the 7th Cavalry and some were killed.)

(The Crow sided with the Army in the Great Sioux War of 1876-77 because the Sioux and Cheyenne were Crow enemies. The Crow must have been sympathetic to the Sioux who were losing their land but on the other hand the Sioux were their long-standing enemies and perhaps they realized that fighting the army would end badly for all Native Americans and they wanted to be on the winning side. Now both tribes are on reserves and there is much poverty and other problems.)

I rate the book at 5 stars because it was a “fun” read and because I read it as folklore rather than a straight history. I would encourage anyone who purchases the book to be sure to read Bender’s new introduction to gain the folklore perspective.

The last things I can say about the book is the interesting period dialogue that comes out of Johnson’s mouth and the other mountain men. You can certainly imagine that’s how the hardy breed of mountain men actually spoke. The authors mention quite a few mountain men, some of whom I’ve heard of and others not. In that way the book represents a by-gone time as mountain men were the first to live and trap in the west long before the first wagon trains began the trek to California and Oregon. The mountain men and the Native Americans they lived among are long gone but the folklore lives on if you read the book with that in mind.

Amazon link to the book I’m referring to

7 comments on “The Saga of Liver-Eating Johnson”