The oldest wartime Life Magazine I have in my small collection is from February, 1941. That’s at least 10 months before the US entered WW2 and so the articles in Life that deal with the war do not have the American focus they would a year later.

In this particular issue (February, 24, 1941) the feature article is titled, The Shadow of Adolf Hitler and His Armies Falls Across the Balkans. After the Nazi’s conquered Poland, France, Belgium, Holland, Denmark and Norway (and failed to invade England) Hitler made ready for the invasion of Soviet Russia which eventually would take place in June 1941.

Hitler’s ally, Benito Mussolini had conquest ideas of his own and Axis Italian armies had been fighting the British (and Commonwealth forces) in North Africa for some time. Mussolini had also invaded Greece and had been defeated by the tough Greeks.

The Italians were in trouble in North Africa where British and Commonwealth troops inflicted a horrendous defeat on them in Libya.

Before the Nazi’s could invade Soviet Russia they had to secure their Balkan flank to prevent the British from totally defeating the Italians and establishing another viable front agains them.

The map takes some getting used to because to our eyes it’s upside down. Life Magazine wanted to give the perspective of how it would look from the point of view of Adolf Hitler and his generals. The emphasis on the strategic resource of oil is obvious. Axis ambitions in North Africa were crushed at the Battle of El Alamein in 1942 and at Stalingrad late in 1942 but in February 1941 issues were still very much in doubt.

The British were quite aware of the possibilities and wanted to do what little they could to help the Greeks. The resources of Britain and the Commonwealth countries were already stretched thin by multiple commitments around the world. Not only that they were for the most part under equipped  having lost much in the Battle for France in May, 1940.  Nevertheless, Britain  sent an expeditionary force to Greece that was made up of British, Australian and New Zealand troops. The Australians and New Zealanders were known as Anzacs. The acronym ANZAC stands for Australian-New Zealand-Army Corps. 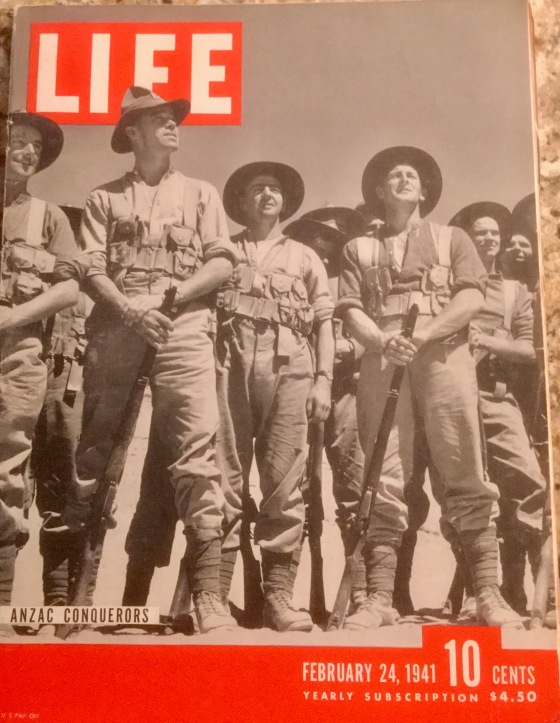 The Australian and New Zealand Army Corps (ANZAC) was a First World War army corps of the Mediterranean Expeditionary Force. It was formed in Egypt in December 1914, and operated during the Battle of Gallipoli. General William Birdwood commanded the corps, which comprised troops from the First Australian Imperial Force and 1st New Zealand Expeditionary Force. The corps disbanded in 1916, following the Allied evacuation of the Gallipoli peninsula and the formation of I ANZAC Corps and II ANZAC Corps. The Corps was reestablished, briefly, in the Second World War during the Battle of Greece in 1942. Australian and New Zealand Army Corps (Note: The Battle for Greece was in 1941.)

The cover of the February 24th, 1941 edition features a photograph of New Zealand soldiers in North Africa after they participated in the victory over the Italians. Life’s explanation of the cover is interesting:

The big, easy-moving men on the cover are from the islands of New Zealand, 10,000 miles from where they are now fighting in the deserts of Libya. The Australians’ and the New Zealanders’ initials supply the first three letters of the famed name Anzac. These insubordinate, hard-fighting, independent men bear a marked resemblance to Texans and have a reputation as soldiers fully as brilliant. The Anzacs, though they are not at the peak of training, have been the shock troops of the British advance into Libya which beclouds Adolf Hitler’s outlook to the south. (Life, Feb.24, 1941, p. 21)

I’m speculating a little here but perhaps the comparison with Texans has some thing to do with the reputation of the Texas Brigade that fought in Lee’s Army (ANV) during the American Civil War and Texas Rangers law enforcement agency as well as American fascination (at the time) with Old West history.  The slouch hats worn by the Australians and New Zealanders perhaps sparked an old west connection to the editor. Whatever the case the Anzacs certainly had a reputation as insubordinate (by British standards) and for hard-fighting. 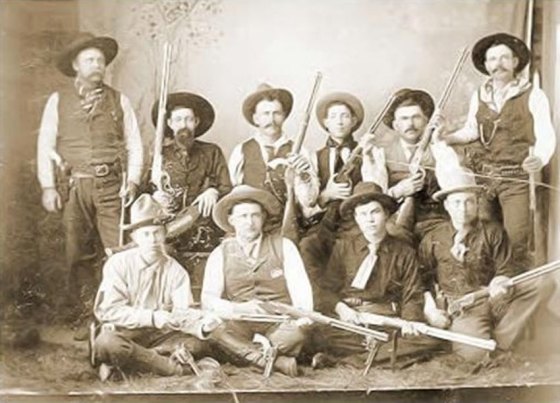 I said I’m guessing about the connection but the slouch hats are clear enough in this picture of the Frontier Battalion of the Texas Rangers in 1880.

The Greece Campaign would prove to be a disaster for the British and Commonwealth troops sent there and after hard fighting in Greece and Crete the troops that were not forced into surrender were sent back to North Africa to regroup and re-deploy. The Corps was disbanded although the New Zealanders (2nd NZ ID) and the Australians (7th and 9th AU IDs) would continue to fight on in the desert war as part of the famed Eighth Army or Desert Rats as they eventually became known.

Eventually, the Australian Divisions would be withdrawn to defend Australia against the Japanese. They would fight in the brutal New Guinea Campaign (with American units) and in Borneo as well as other Pacific locations. Wherever they fought their reputation for being tough fighters remained intact.

The New Zealand Division, no less tough, stayed on in the desert until the Axis surrender there in May, 1943. It was then reorganized and rebuilt after suffering many casualties into sort of a hybrid division that contained strong infantry and armored components. The New Zealander Division became part of the Allied effort in Italy. There it fought in numerous battles including Monte Cassino. It ended the war in Northern Italy in May, 1945.

← U-boats, the Zimmermann Telegram and the US Entry into the War
Zulu War 1879 Imperial Foot →