History Stuff that interests me enough to write about
7 Comments

Recently I came across a cache of WW2 era Life Magazines and purchased three for three dollars each.

The magazines are snapshots filled with historical and cultural tidbits of life in the US during World War Two.

Not surprising are the number of articles related to WW2 and the advertisements that make reference to the war. Most are in black and white but quite a few are in color. Below is an ad from the Electric Boat Company. (Today EB is owned by General Dynamics.)

The Electric Boat Company was located and is located in Groton Connecticut. “EB” as it’s known builds submarines and during WW2 “EB” built quite a few. 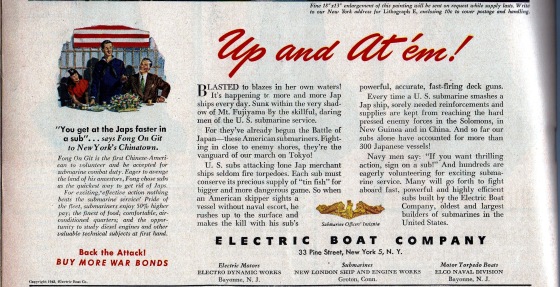 It got cut off in my scan but in the lower right hand corner of the top picture there is free offer that reads: Fine 18″ X 13″ enlargement of this painting will be sent on request while supply lasts. Write to our New York address for Lithograph E, enclosing 10c to cover postage and handling.

I’m thinking that anyone who saw the ad and had someone in the Navy’s Submarine Service probably took advantage of this offer.

The artist signed the painting and his name is Gerald Leake. Gerald Leake was an American artist (1885-1975). During WW2 a number of American artists were commissioned to do patriotic\war effort work and Mr. Leake appears to have been employed by the New London Ship and Engine Works in the department of Electric Boat that was devoted to the building of submarines.

The artwork is interesting on a number of levels including the details.

First, the picture shows the sub surfaced engaging a target with the deck gun. This was a common practice when a merchant ship or transport was not escorted by a destroyer and could picked off alone. There was limited space for torpedoes on a sub so they used them sparingly.

Second, there are seven Japanese flags on the side if the conning tower. The four plain flags (with the red circle only) represent merchant type ships while the three other flags represent warships. This sub has had seven “kills” total.

Third, the caption reads it is Mt. Fujiyama on the Japanese mainland in the background. American submarines did patrol the Japanese home waters although it is unlikely they would surface given the proximity of Japanese aircraft.

Fourth, the sailors manning the deck gun would have less than 30 seconds to get below if the sub suddenly had to dive! I’ve read accounts where men have dived head first into the open hatch to make certain they would make it.

In the lower left of the bottom picture there is a small insert picture of a US sailor with a quote underneath that reads; “You get at the Japs faster in a sub…says Fong On Git to New York’s Chinatown.”

Fong apparently was the first Chinese-American accepted by the Submarine Service. The paragraph tells us that Fong was anxious to avenge the land of his ancestors. That is a reference to the fact that Japan invaded China in 1937.

The remainder of the paragraph describes the benefits of enlisting in the Navy and the Submarine Service in particular. The benefits of service on a submarine include 50% higher pay, better food, comfortable air conditioned quarters, the opportunity to study technical subjects and “get quicker into action against the Japs.”

This past summer I toured the USS Cobia, a WW2 submarine built by EB on permanent display in Manitowoc, Wisconsin where subs of that type were also built. (Wisconsin Maritime Website. During the excellent tour I learned the following about serving on a US submarine.

US sailors had it better on our subs than any of our allies or enemies had on theirs. Apparently, Russian submarines were the absolute worst and an approximation of of what hell might be like.

However, the 50% higher pay was because of the much higher risk. Survivors from a depth charge attack were few and far between.

The food was better and often included ice cream-a luxury not enjoyed by anyone else. The better food was a morale boost as you can imagine. Being confined to under water most of the time with 60-70 other men had to be depressing which is why so many men could not survive the intense training and profiling they underwent.

They did have the opportunity to learn technical subjects. In fact they not only learned their speciality but everyone else’s speciality so that in case of an emergency anyone could do anyone else’s job!

As to the air-conditioning—that is a bit of a stretch although technically true. During WW2 submarines were powered by diesel engines that charged a battery bank. The battery was used when the sub was submerged. The diesel engines ran very hot and very smelly and the engine room was no doubt the worst place to do your duty. The diesel smell, heat and humidity, combined with the sweat of 60+ men produced a rather unpleasant environment which the air conditioning could not and did not cope with. Submariners earned their extra pay in more ways than one.

The Up and At’Em portion of the second picture explains submarine warfare against the Japanese who were often referred to as the “Jap” or “Japs.” World War 2 was not a time of political correctness and many ads and articles sought to stir the emotions particularly against the Japanese who launched a surprise attack against Pearl Harbor that drew the US into the war. No doubt racial prejudices fueled the fire.

The Life Magazine in which this ad appeared is dated November 1, 1943. It is claimed by the ad that up to that date 300 Japanese merchant ships had been sunk; a number that rings true with history. Japan was slowly being strangled as US forces took island after island and successfully reduced the numbers and effectiveness of the Japanese Navy. US submarines built by Electric Boat (and the Manitowoc shipyard) played a significant role in the victory that would come in 1945.