Posted by Bruce on August 18, 2015 in Uncategorized

Recently our little group did a tabletop recreation of the Battle of Gela during the Invasion of Sicily. The scenario was part of the action fought on the second day of the historical battle. 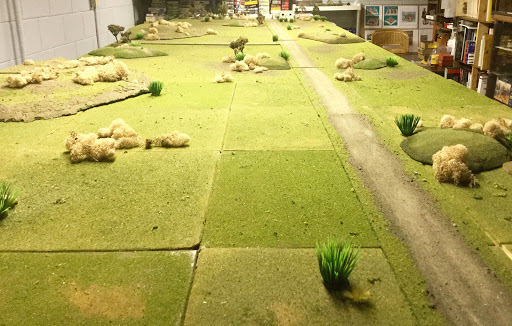 Photographs of the actual terrain reveal a relatively flat, open type terrain with a few rises and hills. In the picture above the Germans would advance from the left side of the picture while the American units would hold positions on the right along the highway running the length of the 16’ by 4” war-game table. A village is pictured at the far end of the table.

Historically the village was occupied by retreating Italian troops from a Coastal Division. Late in the game the 41st Regimental Combat Team from the US 2nd Armored Division (Hell on Wheels) would advance into the town and the Italians would surrender. The German player was unaware of what they Italians might do but he could certainly guess.

The German force attacked from the left side of the first picture.

Most of the German Battlegroup was from the Herman Goering Division which had been badly mauled the previous day by fire from Cruisers and Destroyers. As a result their morale was a bit shaky and some units understrength.

The PZ IV companies each consisted of a PZ IVf1 and a PZ IVf2 thus representing the correct ratio between the short barreled version and the upgraded long barreled version during this stage of the war.

The German attacking force also  consisted of two under strength companies of panzer grenadiers from the 15th Panzer Grenadier Division; pictured to the far left. One company was mounted in a halftrack and the other in an Opel Blitz.

The Krupp Boxer to the rear of the panzer grenadiers towed a small 75mm infantry howitzer as an on board artillery asset element for the grenadiers.

Three of of the four panzer companies attacked on the American right flank. They were supported by one of the under strength panzer grenadier companies.

They attacked 3 dug in companies of the US 82 Airborne Division (All Americans). The AB companies were lightly armed. Two of the companies had a bazooka team asset and the third a .30 lmg asset.

They were supported by AB pack 75mm howitzer assets that were also dug in (picture below).

Off board 105mm artillery was available to support all the American forces but was utilized to support the lightly armed AB.

The 105s were effective taking out a light flak unit, destroying or disabling two panzers and causing morale checks.

One company of the AB was eventually destroyed but the other two units held out until relieved by elements of the 2nd Armored Division.

The two surviving AB companies repulse the assault of a panzer grenadier company attempting an over run. The dug in AB units were elite, and rated “hard to kill” in the rules. This compensated for their lack of heavy equipment and they held the reverse slope of the small hill.

The rules were homegrown and called THAB (To Hell and Back).

Elements of the heavy recon company from HG entering the board backed by two companies of panzer grenadiers. The 20mm flak halftrack was knocked out early by a barrage from off board 105mm howitzers. The other elements of the company would out flank the American paratroop forces and thus were the most successful German unit of the game.

The AB 75mm pack howitzers were positioned to support the AB units as well as elements of the 1st US Infantry Division (The Big Red One).

Two Companies of German tanks trying to turn the AB flank along the highway. At this point in the game they are dueling with a dug in 57mm ATG manned by a company of the 1st Infantry Division. The ATG was destroyed after disabling the tank in the background.

The two companies supported by the 75mm howitzer made a probing attack against elements of the American 1st Infantry Division-in particular a reinforced infantry company that was supported by 37mm ATG assets-assets that were sufficient to turn away the halftrack mounted grenadiers.

This battlegroup would engage a company from the 1st Infantry Division that was supported by a 57mm ATG asset. The ATG destroyed one of the PZIIIs before it was destroyed. It’s sacrifice was not on vain as the German battlegroup did not advance beyond the point shown.

The American center position-reinforced rifle company with the battalion 37mm ATG assets. Had the Germans attacked this point with the panzers it would have been difficult to stop them with the obsolete 37mm ATGs.

Pictured above another company of the Big Red One before the 57mm ATG asset was lost to the two PZIIIs.

The German plan was to outflank the 1st Infantry Division elements by destroying the AB units to the left of this position. The AB units held out and the American center was never seriously threatened.

The 41st Regimental Combat Team from the 2nd Armored Division begins (above) to arrive from the direction of the village.

The panzer grenadier companies from the 115th Panzer Grenadier Regiment were without heavy weapons and so began to withdraw.

The halftrack did not make it and the game was called since it was clear the Germans would not succeed in their objective of reaching the vulnerable beach area.

A splendid time was had by all!

The tank and vehicle models were provided by contributors JZ and MS while the infantry are JZ’s. JZ was also the host and scenario designer.

I, your humble administrator got to play as the Americans and be the war correspondent. (BR)

← “Did you see the Zeppelins?”
Confederate Artillery Battery 1861 →