This series of pictures features my Russian Divisional Artillery for our games.

The rules we use for our WW1 games are derived from MEM44 developed by Richard Borg and available through Days of Wonder.

Mr. Borg gave permission to Gregory Privat to develop a variant titled MEM14. The adaptation was unofficial and was available for free on the INET. It is no longer available as far as I know.

I’ve taken Mr. Privat’s work and further modified the rules and unit sizes for game play on a 16′ by 5′ war game table. Stay tuned for pictures of our WW1 Eastern Front games this fall.

The guns and most of the figures are HAT. The two exceptions being the standard bearer and officer with binoculars which are from the Zveda WW1 Russian Infantry set.

The guns are Putilov 1900\02 76mm first used in the Russian-Japanese War. The gun was still in service in WW2.

The Russians had less artillery attached to their divisions than the Germans in 1914. They also suffered from a chronic lack of supply. Never-the-less the Putilov was an excellent field piece. 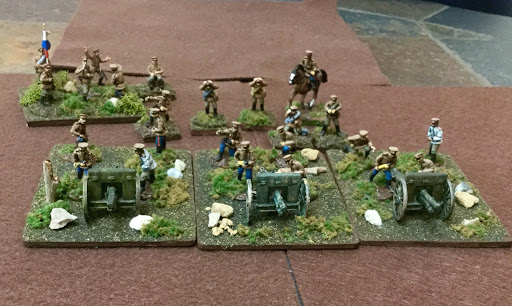 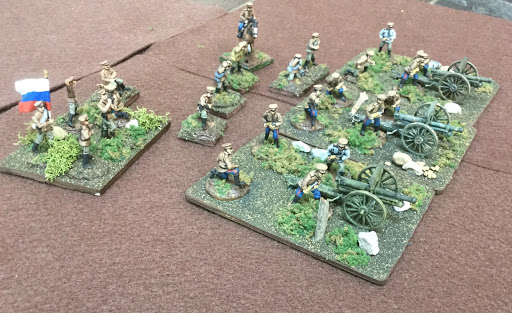 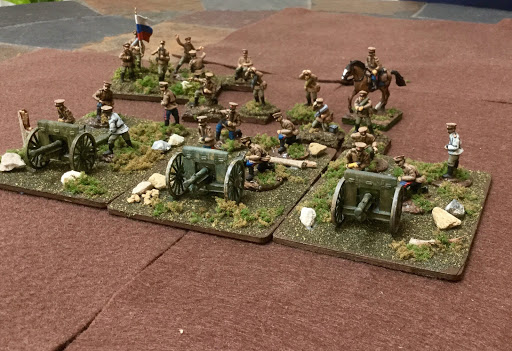