The pictures are from an actual recent 6mm ACW game. Figures, game board and terrain for the game was provided by contributor JZ. The rules used were On to Richmond (mod).

The game reflected the second day’s fighting at Gettysburg as Longstreet attempted to turn the Union left.
The pictures were taken from an iPad Air2 and I was surprised they turned out so well given the scale. My only regret is that I didn’t take more. It would have been an interesting battle report to have turn by turn pictures of what went on in this fast moving game. 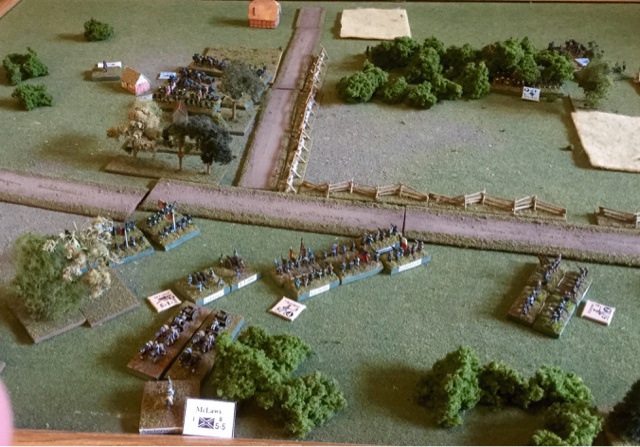 This shot is of the the Confederate left flank-McLaw’s three Brigade Division and a battalion of smoothbore artillery. The Union was on the defensive but the Union player elected to attack in order to prevent McLaw’s from supporting Hood’s Division on the Confederate right. In this picture the bulk of McLaw’s Division has pivoted to meet the Union attack. The Union attack failed badly and McLaw’s Division counter attacked eventually sweeping the Union right flank. McLaw’s boys also took the large Union artillery deployment just above the orchard. The Union artillery was deployed to enfilade any Confederate attack across the open ground on the other side of the fence line. 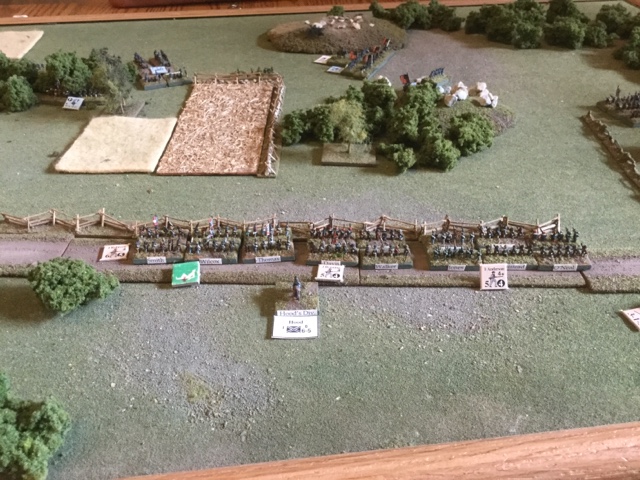 Hood’s four Brigade Division plus a battalion of smoothbore artillery on the Confederate right. Hood had orders to turn the Union left. Robertson’s Texas Brigade on the far left was the pivot while two other brigades advanced through the woods and into the Devils Den. The Devil’s Den had been swept by Confederate artillery but the Union infantry on the other side put up a good resistance for most of the game. Hood’s flanking brigade column (not quite in the picture on the right) was held up by a Union brigade supported by Berdan’s Sharpshooters until the end of the game as well.

The game went to the Confederates who managed an unintentional double envelopment of the Union position due to the early disastrous Union attack upon McLaw’s. The On to Richmond rules (modified) worked very well and the game was concluded in under three hours.

I was experimenting with the iPad camera and got caught up in the game and thus only two pictures were taken. The game was played out on portable game board suitable for 6mm. The overall effect was that of having a birds-eye view of the battle.