Global Warfare with the US Coast Guard 1943

Growing up in the sixties it seemed I was surrounded by World War 2 veterans. Pogo lived down the street from us. His dad was a veteran of the US Navy. My dad was an Army veteran and served post-war (45-46) as a Military Policeman in Cologne and Geissen, Germany. My my uncle was an army veteran who fought in Italy as part of the 10th Mountain Division. My dad’s fishing buddy was a B-24 pilot based in Italy during the war. It seemed that every male I had contact with saw some service in World War 2.

The one I found the most unusual was my friend Peter’s dad. It seemed that everyone’s dad was either in the Marines, Army, (or Army Air Corp as it was called in WW2), or the Navy, Peter’s dad was in the Coast Guard. As a ten-year-old I had no idea what the Coast Guard was and automatically thought it was a “lesser” kind of Navy.

I remember my friend Gary telling me that his dad’s service had something to do with small boats and guarding our coasts from Nazi submarines. That was cool anyway!

All this came to mind on a rummage\antique excursion my wife and I took last year. I scored big and for a few dollars snagged a copy of Foreign Service Magazine dated July, 1943. The featured article was titled, Global Warfare with the U.S. Coast Guard by Vice Admiral Russell R. Waesche.

Foreign Service Magazine was published monthly by the Veterans of Foreign Wars (VFW). Today the magazine is called VFW Magazine and is for members of that organization.

The admiral’s article is a two page account of the history of the U.S. Coast Guard. The Coast Guard was established in 1915 when the US Revenue Cutter Service was combined with the US Life Saving Service. During wartime the Coast Guard becomes part of the Navy and its duties expanded.

In addition to the Coast Guard’s peacetime duties like ice breaking, maintaining shore stations, being an aid to navigation and patrolling (these days chasing down drug runners) the wartime Coast Guard assisted with naval landings of marines and army troops, escorting transports and hunting down Japanese and German submarines.

The cover of this issue is interesting. It features the crew of a cutter (small warship) with one guardsman preparing a depth charge while the other is ready to engage an enemy sub with a Lewis Gun of World War One vintage. The American flag is prominently displayed lending patriotism to a dramatic piece of wartime art. The art work seems to portray a couple of historical examples from the Second World War that the admiral uses.

One notable story is about the Cutter Campbell a 327 cutter that engaged six German submarines. Five of the subs were engaged with depth charges while the sixth was rammed and then sunk with gunfire from the Campbell (pictured below in 1940)! The Campbell was badly damaged in the fight and finally reached port after being towed 800 miles through waters still patrolled by German U-boats. 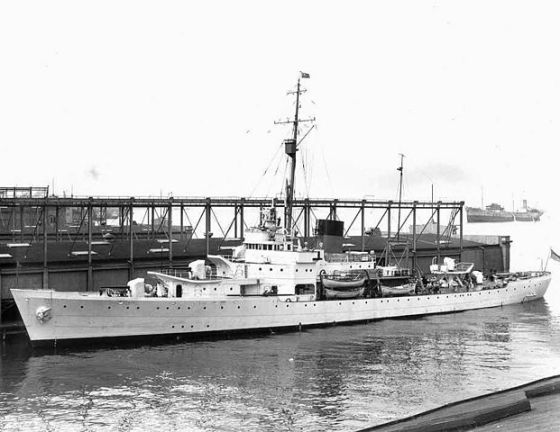 The article goes on to say how the Coast Guard was performing a vital role in keeping the transatlantic supply lines open.

In July 1943 the Allied Armies had just won the North African Campaign (concluded May, 1943) and had invaded Sicily, the first step in taking Italy out of the war. The Coast Guard escorted thousands of transports with men and supplies to the fighting fronts keeping the vast majority safe from submarines.

The U.S. Coast Guard though small performed vital service during World War Two and in continues to do so today.

When I was about 16 a co-worker of my mom’s who I kind of knew joined the Coast Guard. He encouraged me to do so when I turned 18 like he had just done.

At the time the Vietnam War and the draft were still in full swing.  The Coast Guard with an opportunity to possibly serve on the Great Lakes (we lived in Milwaukee on the shores of L. Michigan) seemed attractive for more reason than one.

Shortly after my mom’s co-worker sales pitch my uncle Bill came to visit my mom, his sister. I had admired Uncle Bill, a career Navy man since I was in diapers. I told Uncle Bill that I was thinking of joining the Coast Guard rather than “his” Navy. With a wry smile on his face he asked me why would I want to do that when the Coast Guard only went into the water up to their knees. Typical inter-service rivalry I suppose.

Frankly, I think I would have been happy to be in either service given my fascination with war ships.

← D-Day
They Never Came Home: A Story of Three Brothers Who Fought in the Civil War →

3 comments on “Global Warfare with the US Coast Guard 1943”