I haven’t been writing much but have been reading so I’d thought I’d share my latest books on WW1 along with brief reviews should anyone be interested.

My first plunge was John Keegan’s The First World War. Keegan’s book is written at a strategic level-a kind of movement of armies type book that gives an excellent feel to just how massive WW1 was and what it cost in human terms. Keegan is a top-notch historian and I’ve read many of his books. The First World War is not a page turning novel but a superb documentation of what happened.

My second plunge into the Great War was The illustrated History of World War One by Andrew Wiest. Wiest’s book is broad, like Keegans, but peppered with excellent side bars of pictures, paintings, color maps and much about the soldiers and their equipment, a particular interest of mine. It was a bargain at Half-Price Books. I highly recommend it for anyone wanting to get the big picture but with enough detail to understand something about the little picture as well.

The huge scope of operations of the Eastern Front in WW1.http://simple.wikipedia.org/wiki/Eastern_Front_(World_War_I)

Four empires fell during and after WW1 radically changing the map of Europe and setting the stage for WW2.

The four empires were Germany, Austria-Hungary, the Ottoman Turks and Russia. Russia’s fall gave rise to the Bolsheviks and Russian Revolution that in turn would affect the map of Europe after WW2.

Osprey’s Essential Histories are just that-essential and basic, numbering 100 pages or less. Yet, they are helpful, especially if you know little about the subject matter. The First World War-The Eastern Front 1914-1918 by Jukes is no exception as it served me as a primer on the subject. Osprey peppers these nifty little volumes with great illustrations, maps and pictures giving the reader a fun and fascinating quick read.

Going one better on the subject of the Eastern Front in World War One is Michael S. Nieberg and David Jordan’s The Easter Front 1914-1920. 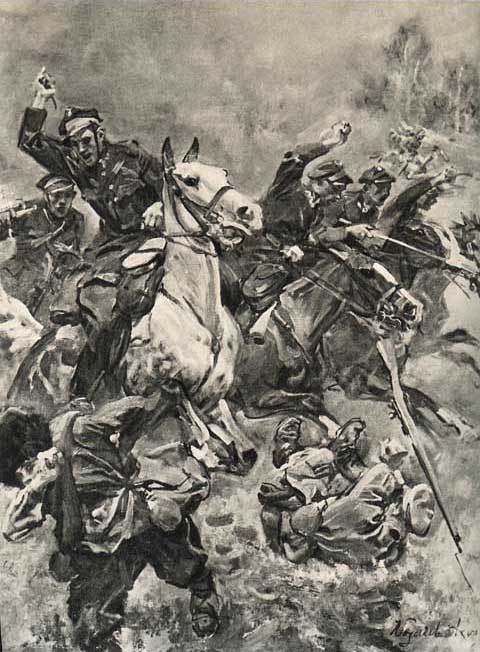 Polish Cavalry over run Bolshevik infantry in the 1920 war.

I found this volume incredible given what the author’s were trying to accomplish in about 200 pages. Like the Essential Histories by Osprey the book is liberally sprinkled with color campaign maps, pictures,  and nifty side bars of soldiers, their equipment and other detail that enhances the bigger picture campaigns with the huge armies.  As a bonus the book also details the Russian-Polish War of 1920. Poland emerged from WW1 as an independent nation and was immediately attacked by Bolshevik Russia. Amazingly the Poles soundly trounced the invading Bolsheviks and even managed to counter attack deep into the Ukraine. I highly recommend this volume. I am in the search for its companion volume on the Western Front.

In the midst of immersing myself about WW1 I came across a recommendation for Richard Rubin’s The Last of the Doughboys.

This book was a departure from Europe because it deals with the US commitment to the Great War. It also differs in what it emphasizes.

In the mid to late 1990s the French Government sought to recognize all US veterans of the Great War that had served on French soil. All of the survivors the French knew about were put on a list and if possible visited by a French official who presented them with a medal. I thought that was an incredibly nice gesture to these men who would soon be gone.

After the fact Rubin got a hold of the list and in the early 2000s began to visit the survivors whose numbers were getting smaller and smaller given the fact that all were well over 100 years of age. His search also included some veterans who did not make it to France but none-the-less did their part in the Great War.

Rubin’s book is a superb human interest book. He interviewed these elderly veterans sometimes more than once simply for their memories and his desire to preserve those memories of a generation that would soon be gone. I had a hard time putting this volume down and Rubin’s skill in his writing seemed to actually transport me into a by gone era and into the lives and memories of the generation that fought in WW1. The book comes in at almost 500 pages. Don’t be fooled; it’s not a combat history but sections do speak of the combat. Rubin has faithfully recorded the memories of rear echelon soldiers like truck or horse-drawn supply wagon drivers, black soldiers (the US Army was not integrated at the time and black served in their own units with white officers), artillery men, men in the trenches and even a sailor and a gal who was “drafted” for an office job in Washington in what became the VA. I recommend this book because of its human interest focus.

Last but not least of my latest reads is Brassey’s History of Uniforms-World War One German Army by Stephen Bull. Yes, I know, kind of geeky, but I have an interest in military miniatures and I paint them so a book like this is what the doctor ordered. It’s highly detailed has a number of color prints and gets into the equipment that the German soldier used in World War One. I will eventually get the volume on the British Army but am disappointed that Brassey did not cover any of the other major powers.