There is a shop in my area that markets collectibles. Lot’s of glassware, Hot Wheels, Action Figures, trains, and piles of other things people like to collect. The shop is semi-organized and according to the owner simply a labor of love. It’s the kind of place a cheap American Picker like me likes to visit.

In addition to the organized collectibles there is much that is not and that’s where I started to dig, especially in the postcards. When I told the owner I was interested in WW1 and WW2 era postcards he was able to direct me to a couple of binders that had some great finds. Below are the best two I found.

They are colorized postcards featuring ships of the Teddy’s Roosevelt’s Great White Fleet-the USS Vermont and the USS Ohio. In the upper right hand corner of the card there is a serial number thus indicating that the cards were part of series. 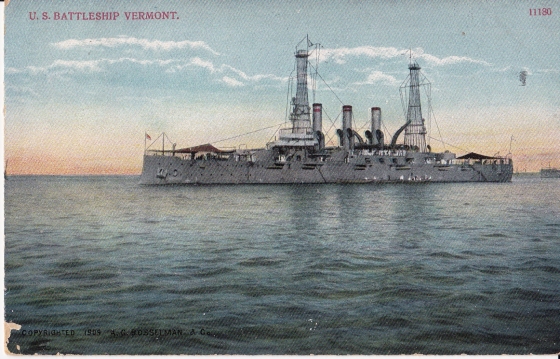 The Vermont was a Connecticut Class pre-Dreadnought Battleship  launched in August of 1905. She was decommissioned in June, 1920 and struck from Navy roles entirely in 1923.

The Vermont’s claim to fame was taking part in Teddy Roosevelt’s Great White Fleet cruise (late 1907-1909). The Vermont was one of sixteen US Battleships that TR sent around the world to establish the US as a significant naval power. Teddy believed in sea power and was a powerful advocate for a strong Navy that would rival even Great Britain’s.

This link will take you a Popular Science article titled, Battleship Vermont (BB-20) Will be the Most Powerful of our Navy. The article pre-dates the ship’s launch. Highlights from the article include the ship’s dimensions, size of the crew (814 men plus officers) and the fact that the Royal Navy has only one ship larger than a completed Vermont.

The link will take you to further links about the Vermont and her sister ship the USS Connecticut.

The Vermont’s later history is  not very exciting. During WW1 it served as an engineering training ship. Immediately after the war the Vermont was converted to a troop transport and used to bring US forces back from Europe at the end of WW1. 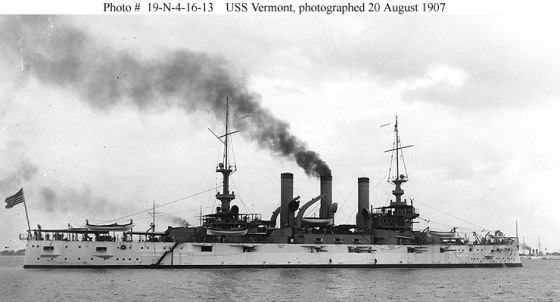 “We are all here but you. I suppose if you were a little nearer you would be here also-will write soon.”

On the left side of the card in small letters it says, “Made in Germany  A.C. Bosselmann & Co., New York. 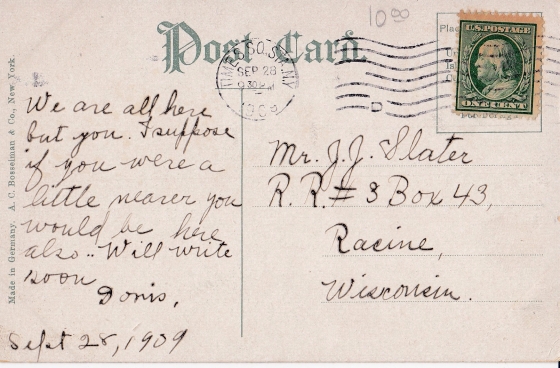 I love the one cent stamp!

The other card I obtained was of the USS Ohio. 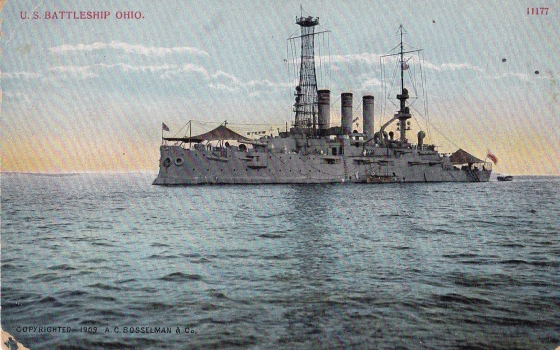 The Ohio was a Maine Class Battleship commissioned in 1904. The Ohio was designated the flagship of the Asiatic Fleet and as such spent its early years on “show of strength” tours that included Japan. After the Spanish-American War of 1898-99 the US occupied the Philippines (and fought an insurrection there), No doubt President Teddy Roosevelt wanted to make it clear the US had arrived in strength in the region.

The Ohio was also included in the cruise of the Great White Fleet designed to show the world American Naval strength. The Ohio served as a training ship during WW1 and decommissioned in 1922 and later sold for scrap.

The relatively short shelf life of these battleships struck me. Technology was advancing so fast that a battleship built in 1905 was obsolete by the introduction of the Royal Navy’s Dreadnought in 1906.  By the time America entered WW1 in April, 1917 the Ohio and all the other ships of the Great White Fleet would be hopelessly outclassed by contemporary British ships (our allies) and the Germans (our enemies). This explains the secondary roles the Vermont and Ohio played during the Great War.

The back of the card is addressed to Miss Grace Stuart, R.R.  #3, Box 43, Racine, Wisconsin (same address as above). Doris signed this one as well but this time as Doris Slater this indicating that J.J. above could be her husband or brother or cousin. Doris writes; 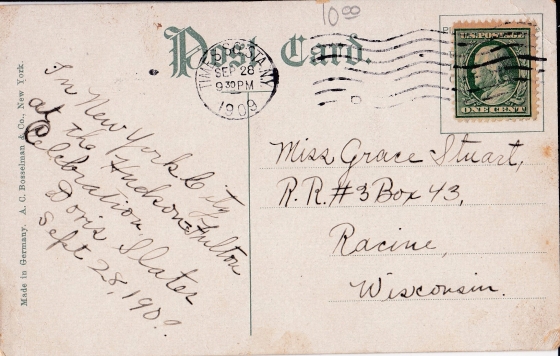 It appears that Doris went to a wedding!

Interesting link to a site that is all things Great White Fleet including a number of examples of the vast amount of postcards produced by different publishers. My cards are not among the examples! The Cruise of the Great White Fleet

← A Sailor, his girlfriend and the Great White Fleet, c. 1910
Why Americans Should Thank King George I →