I’m continuing to salvage pictures from a badly damaged copy of Liberty’s Victorious Conflict even though I am aware that most of the pictures have already been digitized elsewhere.

I do it for a couple of reasons and as one friend put it, a labor of love is certainly one of them. There is something fun about finding old and damaged and trying to preserve it. Ever since I was a kid I had an interest in archaeology so I guess this is my way of playing the role!

So, here are some pictures that I’ve salvaged so far that come from a British perspective and feature the “Tommies” the common term for British soldiers.

One of the prisoners is clearly a medic and four others are wearing the late war coal-scuttle helmet. They are guarded by a single Tommy on the left hand side. I suspect the prisoners are happy to out of that dreadful war.

Although badly damaged by some kid’s crayon it’s still an interesting picture. Gas masks are much in evidence as is the mud! The mud is so bad the stretcher bearers are using a duck board path. The picture captures the misery of poison gas, the horrid mud and getting wounded. 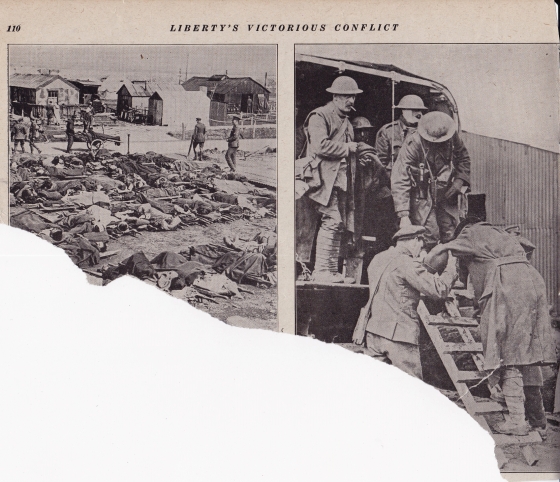 On the left is carnage. Soldiers waiting for treatment, evacuation or in some cases waiting to die. On the right note the fellow with the heavily bandaged face. Horrors of war.

WW1 saw the first widespread use of airplanes as well as the counter measures against them. I was unable to ID the type of gun used in the AA role in this picture.

With few exceptions artillery in WW1 was moved about via horsepower. As late as WW2 horses were the prime movers of artillery in the armies of many countries. The attrition rate for horses and mules was horrendous.