Posted by Bruce on August 8, 2013 in General Military History, History

A friend sent me a link to a website I was unfamiliar with. It’s the Internet Craftsmanship Museum page on a fellow by the name of Philip Warren.

The title of Mr. Warren’s page is The Matchstick Fleet. Mr. Warren has constructed over 450 ships using only matchsticks and matchboxes for his models. He started in 1948 and is still at it. Most of the ships are either American or British and span the years from WW2 to the present.

I want to encourage readers to visit Mr. Warren’s page in order to grasp the man’s talent and passion in constructing his incredible models. Here’s some stats and few pictures plus a You Tube video to whet you appetite:

The Fleet by the Numbers

1,500 = number of matchsticks used in an average size ship

650,000 = Total number of matchsticks used to build the whole fleet 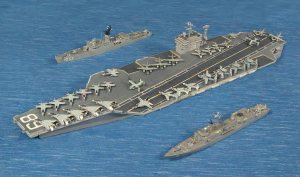 ← Caesar, Czars and Presidents
The Most Powerful Warships of Today →