General William Tecumseh Sherman remarked that “war is hell” as his Army marched through a crumbling Confederacy in his famous March  to the Sea. Certainly the Southerners in the path of Sherman’s Army would have agreed as they saw their lives turned upside down and in some cases lost to Sherman’s “bummers” as his western army was nicknamed. Sherman’s Army was especially vindictive when they arrived in South Carolina the state that fired the first shot of the Civil War at Fort Sumter in April, 1861.

I suppose that vindictiveness and revenge has been the part of most wars, yet Sherman’s March to the Sea pales in comparison to the little known Red Army’s march through the Baltic States (Lithuania, Estonia, Latvia) and through German Pomerania and East Prussia toward the end of the Second World War. 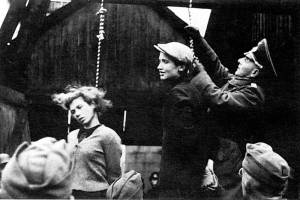 German atrocities in Russia contributed to the “pay back” mentality of the Red Army. For the most part the UK and US viewed the German victims of Soviet atrocities as “they had it coming.”

The Red Army’s advance culminated in bottling up German Army Group North at various points along the Baltic coast.  Hundreds of thousands of German civilians were bottled up with the army and this resulted in the largest sea-borne evacuation ever tried, the largely successful Operation Hannibal in January, 1945.

To use the words “vindictive” and “vengeful” to describe the Red Army onslaught really is to minimize the horror that it was. The Soviet Ministry of Propaganda (very much like the German Ministry of Propaganda when it came to hate) made a significant effort to pay the Germans back ten-fold for German crimes during the invasion of the Soviet Union.

And this is what Prit Buttar’s Battleground Prussia-The Assault on Germany’s Eastern Front 1944-45 is all about-a  war waged without mercy and a war of Stalinist expansion although few apart from Winston Churchill recognized it at the time. I highly recommend this book. It is comprehensive and well-researched and it covers something little known in the west.

The fate of Pomerania and East Prussia began to be sealed in June, 1944 as the Red Army virtually destroyed German Army Group Center in what was called, Operation Bagration, in honor of the Russian General who had given Napoleon such a difficult time when he had invaded Russia in 1812.

The Red Army advance into the Baltic and east Prussia

With Army Group Center shattered and pushed back into Poland (the Red Army stopping at the gates of Warsaw) Army Group North was outflanked thus beginning a long retreat from the gates of Leningrad through the Baltic States and into Germany proper (Pomerania and East Prussia).

The Soviet plan was to  bottle up (or destroy, something that proved very difficult) Army Group North and protect the flank of other Red Army units aimed at Berlin. The Red Army was successful in isolating Army Group North. They had an assist from Adolf Hitler who was notorious by that stage of the war for making hair-brained, non-nonsensical decisions like declaring German cities “fortresses” thus dooming hundreds of thousands of German soldiers and civilians to be stuck behind the lines with no hope of supply or reinforcement.

German Generals that resisted Hitler’s orders or disobeyed them risked being shot and their families being shot such was Hitler’s paranoia following the July 20th, 1944 plot.

As the German Army fell back to one position after another and the Red Army advanced German civilians were caught in the path. One of  the first German towns to fall was Nemmorsdorf, (today Kalingrad Oblast) a small city of no military significance, but had a significant impact on all that followed.

It was significant for a couple of reasons. The Nazi’s refused to evacuate German towns. The idea was the German Army would fight harder to defend German towns and the civilians within. This was probably true as far as it goes but by that stage of the war the Germans had little to fight with while the Red Army enjoyed massive superiority in every arm of combat.

The Nazi’s also made much of defeatism, meaning that to fall back and/or evacuate German areas was tantamount to surrender. The Nazi’s for the most part, that is the card-carrying fanatical types, had no problem evacuating themselves and equally had no problem letting other Germans die so they could.

So, Nemmorsdorf, was not to be evacuated and was supposed to be defended to the last man by what German regulars remained and the Nazi controlled “Volksturm” a type of people’s militia consisting of old men and boys usually poorly armed with captured rifles from Germany’s earlier conquests and often with only five rounds of ammo to work with. They were, what would ave been called in an earlier time, “cannon fodder.” 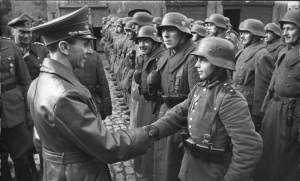 I am uncertain if the soldiers in this picture are “Volksturm” or regular Wehrmacht, although the age of the soldiers illustrate the typical composition of Volkstrum, old men and boys. Goebbels made much of the Nemmorsdorf Massacre and expected these men and boys to die defending East Prussia.

“When we moved through the village, we found no more Soviets. But we were greeted by grisly scenes of people who had been caught up there, which reminded me of he atrocities suffered by Soviet villagers from their own soldiers, something I had often seen during our retreats early in 1944. Here there German women, whose clothing had been torn from their bodies, so that they could be violated and finally mutilated in horrific ways. In one barn, we found an old man, whose throat had been pierced by a pitch fork, pinning him to the door. All of the feather mattresses in one of the bedrooms had been sliced open, and were stained with blood. Two female cut-up corpses  were lying amongst the feathers, with two murdered children. The sight was so gruesome that some of our recruits fled in panic.” Footnote: recorded by G.K. Koschorrek, one the German officers of Battlegroup Jaedtke in Battleground Prussia-The Assault on Germany’s Eastern Front 1944-45)

And this from Captain Jaedtke:

“Apparently the Russian attack on Nemmersdorf and Brauersdorf had over run German refugee columns; the scene that greeted us was grim. Amongst approximately 50 shot-up wagons and along the edge of a wood, about 200 meters away, were strewn everywhere the bodies of shot women and children. In Brauersdorf itself, there were many women next to the village road who had their breasts cut off. I saw this with my own eyes. I received many reports of many other atrocities from units in other areas, but particularity from Nemmorsdorf.” (Footnote: Jaedtke’s account in Battleground Prussia-The Assault on Germany’s Eastern Front 1944-45)

That is more than enough to give the reader the general idea although Buttar records much more in the book. 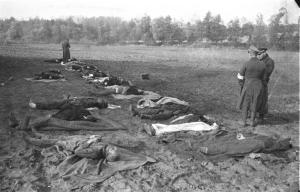 One of the milder images of the massacre at Nemmorsdorf.

After the battle group retook the area Goebbels propaganda machine sprung into action filming the bodies, telling the story and running the film in German theaters and where ever they could to stiffen resistance.

No doubt some stiffening occurred, but Goebbels efforts to get the civilian population to die in their villages back fired because as the Soviet atrocities became known it caused widespread panic as hundreds of thousands of German civilians ignored Nazi orders and streamed westward.

The panic was justified for everywhere the Red Army went German (and Polish, the Soviets making little distinction between the two) civilians suffered the fate of Nemmorsdorf.

And so by January, 1945, the isolated areas along the Baltic Coast was packed with German soldiers and German refugees. Eventually, an evacuation was ordered by Admiral Donitz. It was code-named Operation Hannibal. Hannibal rescued thousands of wounded German soldiers and thousands of civilians seeking to escape the fate of the people in Nemmorsdorf. The scope of the evacuation was immense dwarfing by comparison the Royal Navy’s efforts in 1940 to rescue the British Army from the beaches of Dunkirk.

German refugee column headed west or to ports of embarkation to escape the Red Army.

German refugees packed on to one the ships the German Navy scraped together to evacuate civilians and wounded soldiers.

But there was more to it than that.

One of the reasons Operation Hannibal was as successful as it was is because the Soviets did not press their advantages as aggressively as they might have. To be sure, thousands died under Russian artillery fire and air attack but Stalin had a hidden agenda.

Remember that Germany and Russia were allies in 1939-40. The two countries had divided up Poland. Poland had fought a successful war against the Red Army in the 1920’s and actually controlled a good part of what was the Ukraine. Stalin would not forget this in 1944-45.

After the German invasion of the Soviet Union (June, 1941) the Poles kind of, sort of, became allies of the Russians as did the UK and ultimately the USA.

Once the Soviet Union managed to recover from early reverses and receiving a lot of lend-lease help from the UK and US the Germans began the long retreat back into Poland and Germany.

Stalin, had no intention of liberating eastern Europe in the same sense that the western allies liberated France, Belgium and Holland.

Stalin’s  plan was to annex the Baltic countries of Lithuania, Latvia and Estonia outright and take from Poland much of pre-war 1939 eastern Poland. To compensate the Poles much of eastern Germany would be given to the Poles following Germany’s surrender.

It was then, in the Soviet’s best interest to not press the evacuation too aggressively since the plan was to kick out the civilian German population anyway. While the Soviets didn’t murder everyone they certainly did not wish to feed hundreds of thousands starving refugees.

So, the massacre at Nemmorsdorf served both sides. Goebbels made much of it to stiffen German resistance and the Soviets policy of terror served them by removing the German population from the east.

War is indeed hell and the war in East Prussia must have ranked more hellish than most.

I find this particularly interesting because my family emigrated from Polish-German East Prussia and German-Polish Pomerania. (Another branch is German-Danish. My entire ethnic background is connected to the Baltic in some way!) I have little idea of what happened to relatives, both German and Polish during this time period but it must have been horrific.

6 comments on “The Massacre at Nemmorsdorf”