What did you do in the war dad? Part 8, occupation currency

I have in my possession two envelopes in my mom’s handwriting. My parents were married in 1952 and did not meet until 1950 or so long after my dad’s occupation duty in Germany. This tells me that dad’s pictures and the French francs and German marks below were in my parent’s possession by then and mom was trying to organize them. I surmise they must have received the materials from my grandfather and step-grandmother. Unfortunately no letters have survived that could cast additional light on my dad’s time in Europe.

Although I am not certain I believe that Romilly refers to Romilly-sur-Seine, or Romilly on the Seine River. Dad told me that after basic training his unit was sent to France for MP training so I assume Romilly-sur-Seine is where that training took place. The town is not far from Paris but dad never made mention of visiting Paris, although as posted earlier he must have visited Liege, Belgium or been posted there briefly before moving on to occupation duties in Cologne, Germany.

The writing translates, “Series of 1944 one hundred francs.” Paris was liberated in August of 1944 by the 2nd Free French Armored Division and American units. I am uncertain if the currency is pre-liberation or post but evidence provided on the back suggests a post liberation issue.

The back of the 100 franc note features an oval seal with the word “France” in the center. The three words arced above France read from left to right, freedom, equality and fraternity.

The writing  on the front of the two and five franc notes reads, “issued in France.” The back of the notes are the same featuring the French tricolor with the words freedom, equality and fraternity underneath. All totaled dad sent home 109 French francs. According to a letter sent home from a US Captain in 1944 50 francs equaled one US dollar in 1944. If that is true dad sent home just a little over $2.00 in French francs.

The second envelope in my mom’s writing states, “German marks sent from Erlanger (Erlangen?), Germany, January, 1944.” Since the francs were sent January 22nd, 1946 I have to assume that the marks were sent sometime after that in the same month. I suppose it’s possible that dad sent both sets from Erlangen, Germany and perhaps that is even likely.

The total of marks sent is 6 marks, fifty pfennig 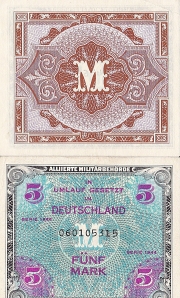 The writing on the very top of the 5 mark note reads Allierte Militarbehorde which translates according to my translator, “allied militarbehorde.” “Militarbehorde” appears to be a compound word that seems to say “military horde.”  The marks are occupation currency even though they are dated 1944. Absent from the currency is any reference to the Reich or Nazism.

Front of all the German marks dad sent home

As far as I can tell there is only one Erlangen, Germany and it’s in Bavaria, not far from Nuremberg where the famous war crimes trials were held starting in November, 1945 shortly before dad’s unit was sent to France for MP training.

Dad told me that  he and some friends took a short leave in Bavaria to go hunting in the Black Forest. He said the trip was notable because as he and his friends made their way around the forest they found gun emplacements and small airfields that still had wrecked airplanes and flak guns. This is consistent with what I read regarding the Luftwaffe late in the war.

The Allies had over whelming air superiority so the Luftwaffe sought to disperse its remaining assets to forests where they would be hard to spot. Dad and his friends probably came across at least one of these small airfields during their hunting trip.

Dad and an unnamed friend outside of a beer hall.

I’ve included this picture of my dad (on the right) and an unnamed friend outside of a beer hall because I’m pretty sure it’s where the occupation troops spent most of their francs and marks! The location of this particular beer hall is unknown but the sign appears to be in English. Because it says “students” rather than military I’m guessing it was located in a training facility of some sort. The fact that dad and his friend are not marked out as MPs suggests they were not trained as of yet as MPs or they were off duty and did not wear their distinctive MP gear while off-duty.

6 comments on “What did you do in the war dad? Part 8, occupation currency”