History Stuff that interests me enough to write about
11 Comments

What did you do in the war dad? Part 7_Liege

Among my dad’s pictures that he sent home are 16 on the same kind of paper. Two are marked, “Liege, Belgium” and the writing on some of the buildings is clearly French. There are two more pictures marked “Belgium” or “Liege” but they are on different kinds of paper. Many of the pictures are of a market square and are redundant.

It was a surprise to me that dad was stationed in Liege with the 707th. I knew that after basic training as infantry one half of his unit was sent to France for MP training in order to replace the combat veterans who were being cycled out. I do not have any pictures from his time in France but do have a number of French francs. They are in an envelope with my mom’s handwriting leading me to believe that she organized some of his things later than 1952 when they were married.

I am therefore led to believe that dad was trained for MP duty in Romilly and then assigned to the 707th in Belgium and then on to the 504th MP Bn. assigned to Cologne and Giessen, Germany which were in the British Zone of Occupation at the time. 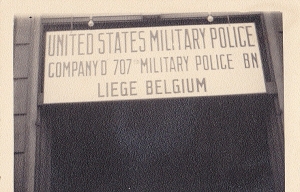 Dad was in Company D of the 707th MP BN while in Liege. 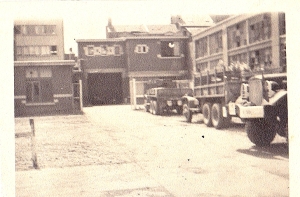 I am uncertain of the significance of the picture and assume it it to be the motor pool for dad’s battalion. 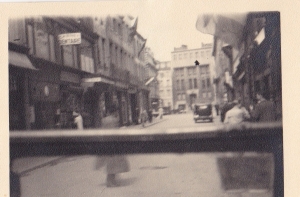 This was taken over the windshield of a jeep. Very narrow European street, buildings appear undamaged. Belgium was liberated by British and Canadian troops. 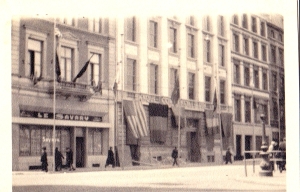 Interesting picture because of the flags on the bank in the center of the picture. I can make out the US flag, a French flag and I think Belgian. Since it’s a bank my guess it was used to exchange money for whatever country it would be needed. The building on the left says “Le Savary.” A Google search turned up the Savary as a French hotel. 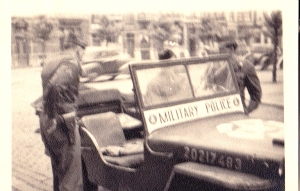 The man on the left is a MP Corporal and he appears as if he’s getting into the jeep. You can clearly see his holstered 1911 .45 pistol. The soldiers identities are unknown but I’m assuming they are members of the 707th, Company D. 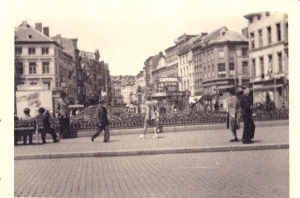 Dad took a number of pictures of the market place. This one appears to show building damage. I read that Belgium was targeted by V-1’s so it’s possible this was a point of interest to my dad. 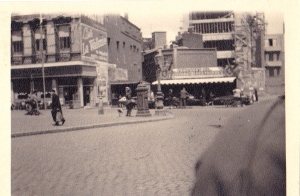 Another market place picture. You can make out the French writing in a number of places. 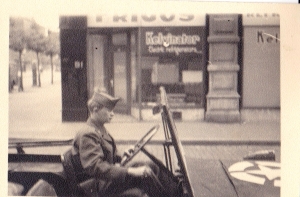 This one says on the back “guess who???” It’s my 18-year-old father looking rather serious and formal behind the wheel of Willie’s famous jeep. The building in the background reads “Kelvinator.” Kelvinator was a British company that made refrigerators before and after the war. 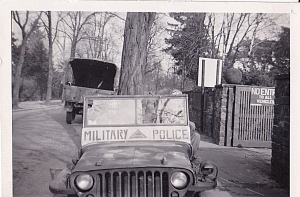 This picture says “taken at the Belgian Red Cross” although it is one of the pictures on a different type of photo paper. Nice shot of the front of the MP jeep! 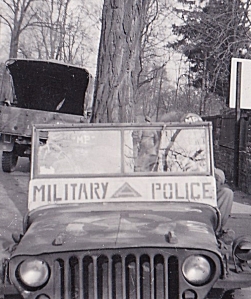 I cropped and enlarged the above photo. On the left you can see the image of the passenger side MP. The driver is obscured by the glare. Between the two men though you can make out the figure of a soldier walking in the other direction. He is dressed as British or more likely Belgian since the British equipped Belgian forces during and after the war. I am uncertain if the driver is my father or he is taking the picture. 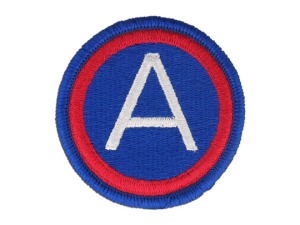 3rd Army patch. I may have one from my dad’s uniform. The 3rd Army was Patton’s Army during the war. While in the 707th MP BN dad was in the 3rd Army. 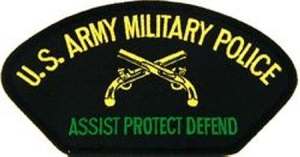 Modern US Army MP banner. The crossed pistols is the symbol of the military police. MP BN size units serve anywhere they are needed including the recent wars in Iraq and Afghanistan.

← Old English Lord’s Prayer (Anglo-Saxon)
What is Pluralism and its Application to Islam? →