What did you do in the war dad? Part 6_Giessen

Dad spent most of his tour of duty in Cologne, Germany in 1946.

For a time his unit, or at least a portion of it, was transferred to Giessen, Hesse, Germany.

Giessen is smaller than Cologne and is located about 50-60 miles SE of Cologne and about 15 miles north of Frankfurt. Frankfurt would host a huge US airbase in years to come and I believe it still is in operation today.

Dad did not take many pictures of Giessen and I do not remember any particular stories from his time there. I do remember him saying he preferred duty in Giessen to the duty in Cologne perhaps because it was smaller than Cologne, today with a population of 76,000 and probably because there were less officers coming around. 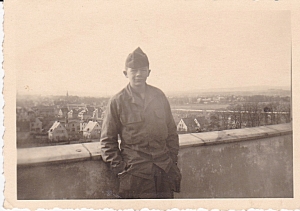 Off day in Giessen

Dad captioned this picture on the back. It reads, “off day taken on top of greenhouse Giessen.” There is an inverted 442 between the words greenhouse and Giessen.

I’m thinking the building is colored green rather than being an actual greenhouse although I admit that’s only a guess. Clearly though, the location was selected for the view because in the background one can see the town of Giessen. From the greenhouse vantage point the town appears relatively undamaged although Wiki states that 75% of the city was destroyed in 1944. A google search  on “greenhouse” turns up a number of locations in the Frankfurt area, one about mid-point between Giessen and Frankfurt. That “greenhouse” appears to be a hotel so it’s possible dad was staying at it on his off day but I admit it’s just speculation. 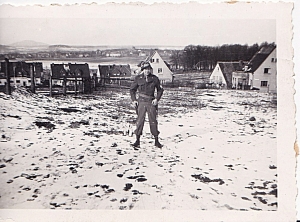 The back of this picture reads, “guess what Giessen.” I’m thinking that when my dad sent the pictures home there was a letter that explained what he was doing in Giessen. This picture appears to have been taken on the outskirts of the town. It’s clearly a duty picture because dad is in his full MP garb. According to Wiki, Giessen had a garrison of 500 American soldiers after the war and that would account for why dad and his MP unit were there. While the MP’s did interact with the Germans they did so primarily through the German police. American MP’s would be used primarily to keep some sort of order among the American garrison troops. Apparently, the base stayed in American hands until 2007 when it was turned over to the Germans. It was probably closed in one of the draw downs following the Cold War.

Cropped image of the above picture

I wanted to get a closer look at the MP uniform so I cropped and sharpened the image. MP’s were clearly identified by the arm band on the left arm and prominent MP on the helmet liner. The “Ike” jacket and tie give a dressed up look to the MP as well as the tucked in pants into the GI boots. On dad’s right hip is a holstered 1911, 45 caliber pistol. Dad enjoyed that pistol and had one well into the 1960’s when he sold it for some reason. Dad was never a shooter or a hunter but he did collect guns on and off throughout his life. My collection of guns is an inheritance from him.

This might be the most intriguing picture of the three known “Giessen” shots.The caption on the back reads, “my pistol .25 Mauser Giessen.” The same inverted 442 as above is placed between the words Mauser and Giessen.

The picture of the gun is of poor quality, the metal parts appearing to be white. A closer examination does reveal the pistol grips. At this point I am uncertain as to what this gun actually is. A google search for Mauser .25 indicates that the .25 refers to the round the weapon fired. The weapon that used the round was the C96 M1916 Mauser or famous “broom handle” Mauser.

I had a reproduction broom handle in the 70’s and dad’s pistol appears to be too small to be that. I think it’s far more likely to be the gun below:

I know little about German side arms used in the war but I’d guess and admit it’s a wild guess that dad bought this pistol from a German policeman (only the Sergeants in the German Police carried a side arm in 1946) and was intrigued by the fact it was a famous Mauser.

I vaguely remember my dad telling me that he had sent some weapons home. He mentioned specifically an ornamental dagger and possibly this pistol. He told me the package never arrived back in the States. I sure would like to have the letters he sent home!

← What did you do in the war dad? part 5 Liberty Ships
The Kaiser’s Pirate Ship – The Astounding Voyage of the SMS Emden →

5 comments on “What did you do in the war dad? Part 6_Giessen”