My son loaded me up with books from my wish list for Christmas 2011 and I finally got around to reading the last one around Christmas time 2012. The last one was Monte Cassino, The Hardest Battle of World War II by Matthew Parker.

In some ways it was the best for last.

The book begins with an outline of the Italian Campaign strategy that led to the epic Battle(s) of Monte Cassino.

The Germans did not actually occupy the monastery at Monte Cassino and offered to evacuate the priceless art within. The Allies did not believe it was not occupied and bombed in with heavy bombers. The Germans then occupied the rubble and turned it into a fort.

The Italian Campaign in general was Churchill’s idea. The reasoning was that Italy was the “soft” underbelly of Nazi-occupied Europe and that an invasion of Italy would take Italy out of the war and thus drain German Divisions from elsewhere to defend Italy . The British further thought that once they fought their way into Northern Italy they could “swing to the right” so-to-speak and liberate Greece before the Communists did. Churchill also had aspirations to get to Vienna before the Russians.

The Americans thought otherwise believing that victory would come by taking the shortest distance to Berlin and to them that meant what would become the Normandy (France) Invasion. The debate between the two great allies was not pleasant and the resulting Italian Campaign was not helped by the fact that the American led Fifth Army was led by General Mark Clark who did not like the British and was as jealous of them as he was personally egotistical.

Personally, I think from a big picture point of view the Churchill plan had merit. I think President Roosevelt and much of the American top brass had a rather naive view of Stalin and Russians while Churchill had them pegged in regards to their postwar intentions. Churchill was proved correct when the Iron Curtain fell across Europe by 1948. It was not to be lifted until 40 years later. Letting the Russians get to Berlin first is another indication of American short-sightedness and naïve willingness to trust Stalin, a dictator who was as bad as Hitler but has suffered far less bad press.

This does not automatically mean the Italian Campaign was a good idea since the Allies clearly underestimated the terrain difficulties and the resolve of their German enemies to defend the inhospitable terrain. The Germans had the advantage of having some of their best Generals in Italy. These included Field Marshal Albert Kesserling, Major General von Senger und Etterlin and Major General von Vietinghoff, generals who used the terrain to maximum advantage to offset the huge advantage the allies had in men and material.

Field Marshall Albert Kesserling on the left. He was actually an Air Force General. Nicknamed “Smiling Albert” by the Allies. He waged a masterful defensive war in Italy.

The Allied Army in Italy was multi-national. It consisted of Americans, British, South Africans, New Zealanders, Canadians, Indians, Poles and Free French, the majority of the French coming from France’s North African colonies. The poly-got nature of the multi-national force brought problems of its own especially since Clark was dedicated to the idea that Americans should be the first to enter Rome (so Clark got the glory). This vain glorious approach to warfare is not helpful in building a coalition of allies. 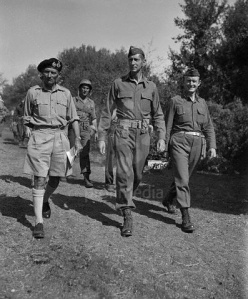 Montgomery ot the 8th British Army (at first) and Clark of the 5th American Army. Both were famous for their enormous egos.

Some of the better Generals on the allied side did not come from the US or British but from the FEC (French Expeditionary Force) led by General Juin and Polish Corps led by General Anders.

The Polish Corps story was as interesting as it is tragic.

Perhaps few people today know that Stalin and Hitler were allies at one time. When Germany invaded Poland from the west the Russians invaded it from the east (after the Germans did most of the fighting).

The Russians transported thousands of Polish soldiers (and the officers they did not kill in the Katyn Forest Massacre) to labor camps. Many died but enough survived long enough to experience a kind of liberation when the Germans invaded Russia in June, 1941.

A movie still from Katyn. The KGB shot over 20,000 Polish Army Officers in the back of the head. The western allies knew they did it too but Stalin was our “ally.”

The Russians allowed the surviving Poles to travel through Iran to be enlisted in a free Polish Army sponsored by the British. Little did these brave Poles know that the western allies would let Stalin keep Poland despite Stalin’s claims he would allow “free” elections. An indication of just how many Poles hated the Russian Communists just as much as the German Nazis is the fact that very few chose to return to a Russian occupied Poland after the war. Most chose instead to immigrate to Britain, the US and Commonwealth countries. A sad story indeed. Parker does well in providing details like this for all the divisions involved in the Monte Cassino debacle.

Versus German 10th Army as above 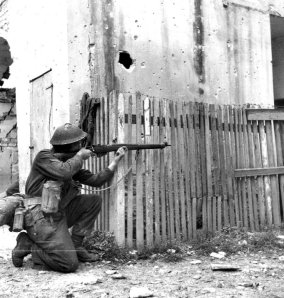 Caption read Canadian, but could be British or other Commonwealth.

Free French Moroccan and Algerian troops made up most of the French forces in Italy. They had a reputation for raping Italian women as well as being fierce mountain fighters.

In as much the order of battle gives some idea of just how many divisions were involved in the Monte Cassino battles it is not the main strength of the book.

The book is largely based on the reminisces of the ordinary soldiers.

Frankly, the book is a book of horrors. Any romantic or heroic notions of war are dashed to pieces in reading this book. It took the allies three months to finally take the Monte Cassino monastery, a monastery set in some of the roughest terrain in Europe.

Both sides could not adequately evacuate their dead and so both sides frequently fought around the bodies of their decomposing dead friends. The soldier’s reminiscences nearly always mention that factor. The huge causality rate suffered by both sides seems to have more in common with the trench warfare of the first war rather than any notions of mobile warfare of the 2nd.

I found it to be an extremely sad book, yet a necessary book that documents that extraordinary sacrifices of soldiers who just wanted to end the war and go home.

I found that the book was not so much about great battles, but about the great people who have to fight them and by that I do not mean the Generals, though some did not throw their men’s lives away thoughtlessly. I do mean the rank and file soldiers often led by company grade officers who knew full well what that superiors did not seem to know and that is trying to prevail in a task that proved impossible time and time again.

I give Parker 5 stars for what I’d call a definitive study on the Monte Cassino battles.

For further reading of the Katyn Forest Massacre

Wiki overview of the Italian Campaign