History Stuff that interests me enough to write about
12 Comments

One of the benefits of a long Thanksgiving weekend was staying up late to finish one of my many started books, this one off my Kindle app for iPad. I really have to get better at finishing one book before starting another!

The book finished is Harvey Black’s Silk Drop, Book #2 in his Devils with Wings Series.

In Silk Drop Harvey deals with the German airborne assault on the Island of Crete in May, 1941.

The historical backdrop of the novel is that the Italians are not faring so well in their war against Greece. The Germans in order to bail out their ally and protect their southern flank (in preparation for the invasion of Russia) must subdue the Balkans including Greece and then the island of Crete.

Ju52 transport plane, workhorse of the Luftwaffe transport fleet. Nicknamed Tante Ju (auntie Ju) by the Germans who depended on them.

Britain and the Commonwealth countries of New Zealand and Australia are contesting the German advance in Greece and then in Crete. On Crete they are led by the New Zealand General Freyberg.

The Grune Teufel (Green Devils, as the German paratroopers are called) are sent first to seize the strategic port of Corinth in Greece then later to seize the island of Crete in what was Operation Mercur.

Fallschirmjager MG-34 team. Miniatures are King and Country and from the reviewers personal collection.

The battle would be the first large-scale airborne operation of WW2. It featured the German 7th Airborne Division and as follow up the 5th Mountain Division who would land either by sea once the Cretan ports were secured or via air transports.

The island was defended by British, Australian, New Zealand and Greek troops who fought furiously against the Fallschirmjagers (paratroops) and Gebirgsjagers (mountain troops), so furiously, that the Germans lost 7,000 men taking the island.

Hitler forbade any further large scale airborne operations after Mercur because of the casualty rate. This would prove to be a mistake in the later Desert War because the British held the island of Malta throughout the war in the desert. Malta was a strategic point that wreaked havoc on the German and Italian supply system serving as an unsinkable aircraft carrier and denying the Africa Corp much-needed supply.

In Silk Drop each character is further developed with a couple of surprises along the way. I won’t be sharing any spoilers but I was very surprised by one early development in the book regarding Paul. How the incident plays out later, during the assault on Crete is also interesting and understandable.

Brand’s company is part of a special battalion led by Major Volkmann (known as the Raven by his troops) and serves as a divisional asset to the 7th Airborne Division. The unit is assigned to a special task and Brand’s company is to serve as the advance guard.

The story is never slow and the company’s adventures on the fringes of the main conflict make for one exciting read, especially after Max is severely wounded and cut off behind enemy lines with his beloved officer and friend.

I’m also enjoying the character development of some of the minor characters like Fessman, ex-poacher and now scout extraordinary. Another favorite of mine is Leeb who rises from the ranks to command a platoon of his own.

By now all of Paul’s officer friends like Helmut and  Erich are attached to staff positions or command companies of their own so there is much less interaction between them, yet enough to get the reader to realize the comradeship between them.

There is more than one griping moment in this book and I’ll mention but two.

During the initial drop on Crete the Fallschirmjagers are crammed into Ju-52 transport planes . Arriving over Crete they are subjected to AA fire. Being stuck in an aircraft, not being able to see what’s going on, and being shot at by flak has to be one of the most terrifying experiences a paratrooper could endure. The book captures the feeling well.

Another frightening moment occurs when the unit is counter-attacked and the British have two Matilda II tanks, heavily armored monsters and the Fallschirmjager’s have nothing more powerful than a 50mm mortar to harass the beasts!

Once again Harvey has an eye to detail describing the various equipment used by both sides, a nice touch that appeals to WW2 geeks like myself. Harvey also does a great job of describing of what it was like on Crete, hot, very hot, dusty, not much water, yet in places quite beautiful. Through his descriptions you get the feel of being there and I wondered if Harvey had walked the ground himself in order to get the right touch. 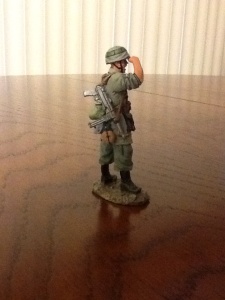 Another view of the Fallschirmjager officer. King and Country figures have an excellent eye for detail. The officer’s MP-40 machine pistol is clearly seen on this figure as well as the distinctive Fallschirm helmet.

The editing problems from book #1 have been largely resolved and the story moves along quite nicely. (Note that the second edition of Book #1 has eliminated the editing issues as well.)

It is a book about war and I think Mr. Black has struck a good balance between the real violence that is war and adding what might be too much detail. For example, it’s enough to know that some Greek partisans committed an atrocity on three captured Fallschirmjager without knowing the grossest of details.

Another thing I appreciate about the books is that Harvey will use the language of soldiers without over doing it for shock effect. During WW2 soldiering and war was mostly the business of men and Harvey’s books reflect that without being over-the-top. I for one appreciate it.

The book ends with Volkmann’s battalion being sent to the opening of Operation Barbarossa, the German invasion of Russia. Although I told myself I was going to start another book I changed my mind after Silk Drop and started to read Frozen Sun, the third book by Harvey Black in the Devils with Wings Series that deals with their role in Barbarossa.

Fallschirmjager anti-tank gun and crew. The anti-tank gun is a 3.7cm and would prove woefully inadequate in the German invasion of Russia, the next place of action for the Grune Teuful. Figures by King and Country and from the reviewers personal collection.