History Stuff that interests me enough to write about
25 Comments

My Wife and her connection to an Indian Raid, 1694

Posted by Bruce on November 1, 2012 in Conflicts, Genealogy, History, Misc

About a year ago I started researching my ancestry and my wife’s.

Hers has a better paper trail than mine. Through her great-grandmother’s line which is French-Canadian I came across the below story.

The short version here is that my wife’s distant relative lived in early Durham, New Hampshire, c 1694, a town not far from Boston, Massachusetts. As a young woman her family was massacred by Iroquois or Abenaki Indians allied with  the French and she was taken captive to Quebec.

Apparently she was ransomed so-to-speak by a French Canadian military officer who adopted her. Later she married another French-Canadian but as a Protestant this would not do so she was baptized a Catholic. Her line of descendants would evolve to my wife’s great-grandmother, Jessie Despins who left French Canada (Quebec) to move to Wisconsin (1850’s) where she met James Robinson, a transplanted Scotsman who also settled in Wisconsin after service in Civil War. They married in 1865. 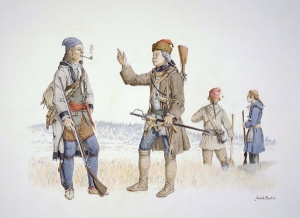 Amazing story. Never know what you might find. Here’s the existing data.

Notes for MARIE URSULA MERCY PLAGNOL ADAMS: Marie apparently got to Canada as a captive of the Iroquois from their attack on Durham in 1694, aided and abetted by the French. Both her parents were killed by the Iroquois during the Oyster River Massacre. The Oyster River flows through Durham, NH. Her name appears in one NH source as “Marcy or Ursula” and her married name as”Brisebois”.  (should be Dubois) Charles Antoine Plagnol, the commandant of the fort at St. Francois du Lac adopted Mercy.

On Apr 6 1697 she was baptized as Ursule, a name chosen for her by her godmother, Maruerite Swigneuret, wife of Jean Boudor. Ursule (Mercy) married on Aug 3 1704 at St. Francois du Lac to Charles Dubois dit Brisebois

← Sorry, we didn’t have enough information
Confessions of a Book-a-holic →