Posted by Bruce on October 29, 2012 in Conflicts, Islam, Misc, News and Commentary

Personally I think the main stream media is sitting on the biggest Presidential scandal since Watergate. It’s bigger than Watergate, bigger that Iran-Contra, bigger than Monica Lewinsky, bigger than Abu Ghraib and bigger than the petty attacks launched at the Republican nominee for President. And now there is a hurricane to help them sit on it.

The main stream media continued to toss Obama softballs on what happened in Libya until the hurricane became the bigger news.. They allowed him to never answer the question. What appears to be painfully obvious to the average engaged citizen is ignored by most of the media as the administration continues to “investigate” and “figure it out” and blame some low-grade video that no one saw, least of all the Jihadists who killed our people.

When will the administration get it through their thick skulls that the point of the spear, the Islamic Jihadists, hate us, want  to kill us and desire to impose world-wide sharia law? They do not need any more reason to attack the west and anything else is simply a pretext to achieve a larger goal.

And Barack Hussein Obama refuses to see it. Why?

There is probably more than one  reason but one is his sympathy toward Islam that papers over the acts of  the Jihadists. In an effort to be pc he underestimates the zeal of the few to motivate the less zealous to be quietly supportive of Jihadist goals.

The relative silence of Islamic States on terrorist acts speaks volumes about their fear of the Jihadists and this their tacit support Jihadist goals.

Do not expect the administration to wake up. If Obama wins it will four more years of the  same.

Remember Libya, remember 9\11, remember Obama’s over-the-top affirmation of Islam before you cast your vote. Forget Democrat or Republican and vote for the freedoms that are at risk if Obama wins again. 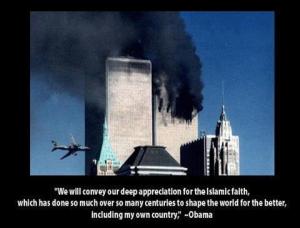