Columbus Day, Rant of the Day

So I missed the memo it was Columbus Day and went to the bank only to discover it was closed in honor of Christopher Columbus who blundered onto the new continent.

So, I’m a little annoyed the bank is closed and then a little more annoyed because Chris didn’t “discover” America, the Vikings did. (not the Minnesota Vikings!) 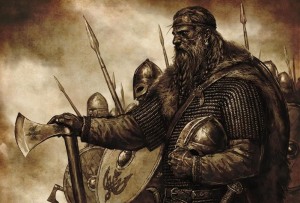 Yeah, we found it first!

Yeah, yeah, I know the Irish make a claim and recently I heard so do the Chinese but at least with the Vikings you have some evidence such as Vinland and L’Anse aux Meadows.

I’ll never forgot but my son was in second grade, maybe first, and he came home one day and said “daddy, my teacher said Columbus discovered America and you said the Vikings did.”

Nothing worse than some teacher undermining a father’s accurate transmission of history to his son.

So, I produced a small book documenting the Viking settlement (complete with artwork) in Vinland and my proud little guy took it to school with him ready to defend his daddy’s point-of-view. To her credit the teacher spoke of the Viking’s earlier exploration of the North American Continent.

Now I’m thinking of sending the volume to my bank. Maybe they will at least change the day to be Leif Erickson Day. I doubt it. Some people just aren’t teachable.