The Battle of New Market, Virginia, May, 1864 was a rather small affair by American Civil War standards. Only about 10,000 men on both sides were involved.

Yet, it is one of the most popular, well-known battles of the War Between the States. The reason for this is because of the charge of the VMI Cadets who had left their school in Lexington, VA and made a long march to the battlefield. The cadets, most very young, were called up to offset the Northern advantage in numbers. The cadet’s charge, near the end of the battle was almost immediately immortalized after the war making the cadets and Virginia Military Institute famous.

But Knight’s book does not focus on the cadets although they certainly are a feature in this excellent, detailed account of the Battle of New Market.

In the preface of the book it is noted that Knight’s Valley Thunder is most recent book that documents the entire battle as well as the opening moves of the Shenandoah Valley Campaign. The last major work was by William C. Davis, The Battle of New Market, published in 1975. The preface written by Davis notes that Knight was a battlefield guide at New Market Battlefield and has discovered so much more research since Davis wrote his account. Davis whole heartily endorses Valley Thunder and in my estimation rightly so.

(Photo credit: Wikipedia) Museum on the grounds of the New Market Battlefield. The park is adminstered by VMI.

The book begins by presenting the overall situation in the Eastern Theater of the Civil War.

Lee is tied down with Grant on the other side of the Blue Ridge and Grant seeks to take advantage of Lee’s limited manpower by starting something in the Shenandoah Valley. Grant appoints a political General, Franz Sigel, to take command of the scattered Union troops in the area and threaten Lee from the flank by over running the valley, a key area of supply for the Confederacy.

A scratch Confederate force under Generals Imboden and Breckinridge is combined and assembled to stop Sigel and that sets the stage for the battle.

Sigel’s total force numbers around 10,000 but only a portion get to the battle in time.

Breckinridge, the overall Confederate commander had about 6,000.

Knights descriptions of the two Generals set the tone for the rest of the book.

Sigel the brave, but ponderous, unimaginative German who was selected precisely for the German immigrant vote, versus Breckinridge, former VP of the United States and now a Confederate General of some ability. In some ways the campaign was lost for the Union well before New Market since Sigel never really seemed like he knew what it was he was supposed to accomplish.

As interesting as the beginning chapters are it is the personal accounts that Knight has used to make the story come alive. The strength of the book in my opinion is Knight’s use of research that has been uncovered via personal letters and battle reports. Knight expertly weaves these accounts into his narrative of the battle. 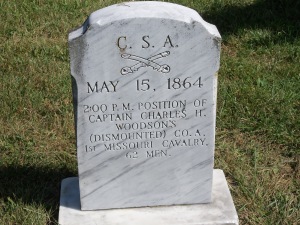 Marker for Woodson’s MO Cavalry. This unit was the only unit from Mo to serve in the Eastern Theater of the War Between the States.

In other words it wasn’t the fact the 1st New York Veteran Cavalry  and 1st Maryland Potomac Home Guard were ordered to make a charge that was a disaster. Instead Knight describes the incident in the participants own words:

“One Confederate artillerist wrote that he and his comrades ‘gave them a blizzard that sent them back hastily to their comrades.’  Staffer Johnston described the charge as having been ‘repulsed disastrously.’ Breckinridge cooly reported that ‘an attempt was made to charge down the turnpike with cavalry upon my right but a few well directed shells dispersed the squadrons.’ A Federal sergeant put a fine point on the affair when he wrote, ‘they mowed us down like grass.’ ” (p. 167) 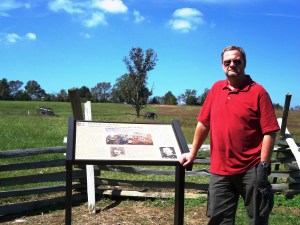 Me, near the spot von Kleiser’s New York Battery was overrun.

It is detail like that which permeates the book and provides a riveting account through the eyes of those who were there.

Throughout the book Knight charts where and what the VMI cadets are doing but he does so without making their gallant charge the central feature of the book. Instead, what you get is a Union and Confederate perspective on the battle by highlighting what all the units at the battle were doing.

Knight also make some corrections to the record. For example, the cadets were credited with taking a Union battery (4-6 guns) when in reality they really only took one while other Confederate units took others (the painting below shows the moment).

The book is supplemented by some excellent maps and a good selection of photographs. There are eight appendices that flesh out some of more interesting aspects of the battle. The appendices in and of themselves are a fascinating read for a Civil War geek like me.

I give it five stars. My only regret is that I wish I had read it before walking the ground of the battlefield.

The Battle of New Market and the Opening of the Shenandoah Valley Campaign, May, 1864