Posted by Bruce on September 18, 2012 in American Civil War, History

Yesterday we spent a good part of our day in Lexington, Virginia.

Lexington is home to Washington and Lee University, named for George Washington and Robert E. Lee who served as the university’s president following the Civil War. One of the guides told us that Lee had turned down a $50,000 a year offer from an insurance company to take the $1,500 a year position at the college. This is remarkable on a number of levels. Lee did not want to capitalize on his famous name.

The chapel where General Lee and many of his family are buried.

Lee is buried under the college chapel as is a good portion of his family. On the top floor of the building lies Lee’s marble sarcophagus, an exquisite piece of art. The story is that Mrs. Lee wanted her husband shown at rest, as if he were sleeping in his Confederate uniform. He was actually buried in civilian clothes. The idea was to capture the General resting during the many campaigns when he led the Army of Northern Virginia. Reproductions of Confederate battlefields surround the sarcophagus.

The museum guide told us that officially Lee died of pneumonia brought on by a stroke but that his health had been declining for some time. He was 63 when he died.

Lee attended church services at the Episcopal Church but he also attended services at the chapel where he had his own family pew. The guide said the school itself leaned Presbyterian at the time and that many young men went there to prepare for the ministry. I found a heavy Presbyterian influence in Lexington as a whole and suspect it was connected to the Scotch-Northern Irish connection to N. America dating back to prior to the American Revolution.

A separate room, quite large has many details of Lee’s life and family life. Lee was married to Mary Ann Curtis who was a relative of George Washington. My wife and I found a mistake in the museum which made my day. Mary Ann died in 1873 but one of the displays of her by a portrait dated her death in 1856. The museum guide concurred it was indeed a mistake and as far as he knew we were the first to pick it out. He said tongue in cheek we would get to slap the curator!

The book store was small but well-stocked with every thing Robert E. Lee. I resisted the urge to spend all my money and settled on something different. I purchased a book on sale titled Reading the Man-A Portrait of Robert E. Lee Through His Private Letters by Elizabeth Brown Pryor. 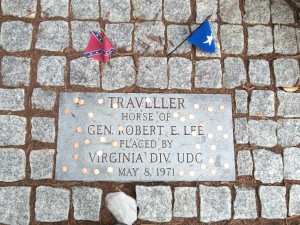 Over the years I’ve read much on Lee regarding him as a General and a leader but not much regarding his private life. Like many in his day he wrote many letters and the author has collected many of them to give us a glimpse into the man’s life.

Lee’s favorite horse Traveller is buried outside the chapel. I can’t think of a more famous horse than Traveller. The horse like General Lee himself was cool under fire.

I only put a few of our pictures into this post from my rinky-dink camera. My wife has some better ones from her Cool-Pix but at the moment we’re in the middle of a downpour and her camera is in the car. All that to say I’ll post more later! 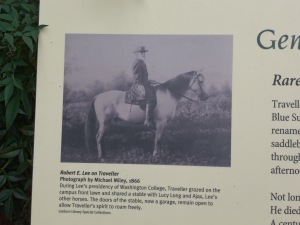