Battle of the Bulge Miniatures_American

One of my interests is collecting military miniatures. Back in the day my collection was in 25mm scale and I painted most of them my self. Now with the eyes going I do not paint much anymore and have shifted to collect 54mm pre-painted miniatures in periods of history that interest me.

The vendor I am most fond of is King and Country, a British company located in Hong Kong. It’s just a wild guess but I bet they are there because of the labor costs.

Whatever the reason they chose Hong Kong the fact is their quality in excellent, especially for the cost. Collecting hand painted military miniatures can be an expensive hobby which is why I don’t have all that many. King and Country provides excellent quality at a competitive price.

Like most military miniature manufactures K & C puts out their figures in ranges or lines such as American Civil War or Revolution or Napoleonic Wars and so on. K & C will start a line and release “x” numbers of figures in that range. After a time they will begin to retire the line. I suppose this is done to enhance the collectibility of the figures and make the figures rare thus driving up after market prices.

As a result I have fragments from a number of ranges since it’s difficult to collect them all, although I have heard of wealthy individuals plopping down enough cash to take the entire line home.

Here’s a sample from my WW2 collection. The pics are from K & C’s website and represent figures I have that are not yet retired. They are from the Battle of the Bulge range.

This fellow is taking a break with a cup of coffee. One of the things I like about K & C is that they always have a number of non-combat poses. This one captures an American doing what soldiers have always done, taking a break with coffee, or tea if they are Brits. He’s armed with M1 Garand Rifle. K & C is meticulous about the weapons, another detail I enjoy. 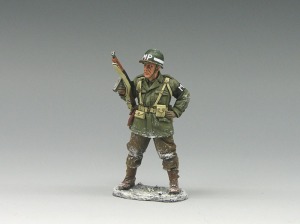 This fellow is kind of special. I originally purchased him because I was looking for a MP. My dad served in the occupation army in Germany as an MP (1945-46). For some reason his unit served in the British zone of occupation. During the Battle of the Bulge American MP’s manned roadblocks since the Germans were dressing up like Americans including American MP’s. The real MP’s were there to sort out the fakes.

This fellow looks like he means business and is armed with the famous Thompson sub-machine gun.

This vignette was a gift from my son and daughter-in-law. It shows two soldiers standing around the sign “Bastogne.” Bastogne turned out to be the center of gravity during the Battle of the Bulge. The Germans could not take the town and that had an effect on their offensive and helped slow it down. One of the soldiers appears to be a replacement who has just arrived. He has his duffel bag and is armed with the M1 Rifle. His associate has the look of a tough veteran. He cradles the B. A. R. (Browning Automatic Rifle). The B.A.R. had a rather long shelf life. It was first introduced in WW1 (1917-18) and served in American Armies through the Korean War (1950-53). I think that during the Battle of the Bulge period each American rifle squad had two B.A.R.’s. My dad told me that during training the B.A. R. was his favorite weapon although he said the Thompson was the MP’s weapon of choice.

I have a few more Americans from the Battle of the Bulge range but the K & C website did not have pics because they’ve been retired. I’m not sure my little digital camera would do them justice but I might give it a whirl. I’ll post some of my German figures from the period in another post.