Pastor Mark Driscoll posted this on FB this morning and it reminded me of my past:

‎”Christianity, if false, is of no importance, and if true, of infinite importance. The only thing it cannot be is moderately important.” – C.S. Lewis

I’m not certain but I think the Lewis quote is from Mere Christianity, one of Lewis’s classics. It’s especially meaningful to me. Back in the day I was what you might call a lapsed Catholic with agnostic leanings. I would not have even fit into Lewis’s category of thinking Christianity was moderately important because it was not all that important to me.

An encounter with Matthew 16:13-17 began to change all that.

I started to read a lot and someone tuned me on to Lewis and Mere Christianity. As you may or may not know Lewis was an atheist and a smart one at that prior to his own awakening to the claims of Christ.

I think Lewis makes the case (using logical reasoning) that if Christianity is true then it is of course of infinite importance. The central issue in the book has to do with the question “was Jesus who he said he was and if He was and is then what does that mean?” Lewis posited the following as summed up in a Wiki article:

Lewis, arguing that Jesus was claiming to be God, uses logic to advance three possibilities: either he really was God, was deliberately lying, or was not God but thought himself to be (which would make him delusional and likely insane). The book goes on to say that the latter two possibilities are not consistent with Jesus’ character and it was most likely that he was being truthful. 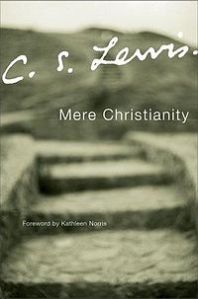 Was Jesus who he said he was?

If you are like I was and unsure of the importance of Christianity or the claims of Christ and you have a bit of an open mind then take the time to read Mere Christianity by C.S. Lewis. It could be an important decision.